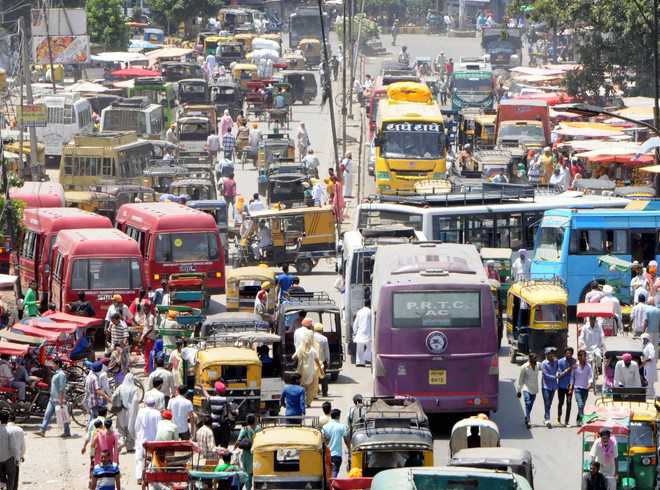 While releasing the factsheet of the environment monitoring study, Smart City CEO and MC Commissioner CEO Komal Mittal said this monitoring was conducted under the CITIIS programme to know the post-monsoon pollution level in the city. File photo

Last year in October and November, levels of air and noise pollution were monitored in different parts of the city under the Smart City Mission. Under this, a total of 13 places of the city — bus stand, Maqboolpura Chowk, 100 Feet Road chowk, Bhagtanwala Chowk , DTO Office chowk, Rialto chowk, B-Block Market Ranjit Avenue, SSSS Chowk, Mustafabad BRTS Station (Batala Road), Ratan Singh Chowk, Chheharta Chowk, Majitha Road bypass chowk and Town Hall were monitored 24 hours continuously with combo dust sampler machine and noise level meter. Where particulate matter (PM) 10 and PM 2.5 levels in the air have been reported higher than the normal value. Apart from this, the level of noise pollution has also been recorded higher than the limit set by the Central Pollution Control Board.

While releasing the factsheet of the environment monitoring study, Smart City CEO and MC Commissioner CEO Komal Mittal said this monitoring was conducted under the CITIIS programme to know the post-monsoon pollution level in the city. The CITIIS programme is run by the Union Ministry of Housing and Urban Development and funded by the French Development Agency and European Union. She said under this monitoring, level of PM 10 and 2.5, sulfur-dioxide, nitrogen-dioxide, carbon-monoxide, ozone as well as noise pollution levels were monitored in 13 places for three days (two working days and Sunday). In which the average amount of PM 10 and 2.5 in the air during working days in the city was recorded at 130.2 and 91.0 respectively and 108.6 and 71.3 on Sunday. At the same time, the amounts of sulfur-dioxide, nitrogen-dioxide, carbon-monoxide and ozone were less than the maximum limit.

The most polluted area was in the vicinity of the bus stand, where the amount of PM 10 and 2.5 in the air during working days was recorded as 211 and 128 and on Sunday, 197 and 125. The highest level of noise pollution was recorded in Rialto Chowk, where it was recorded 92.6 on working days and 98.4 on Sunday. She also said that this is the first time when pollution monitoring study is conducted in the pan city under the Smart City Mission. “Pollution levels have been monitored on all the main traffic routes of the city. In which the amount of PM 10 and 2.5 particles in the air has been reported to be much higher than the average. An excessive amount of PM particles in the air is very harmful. Due to which 6.5 lakh people die every year in India and 19,000 in Punjab,” said Mittal. —TNS