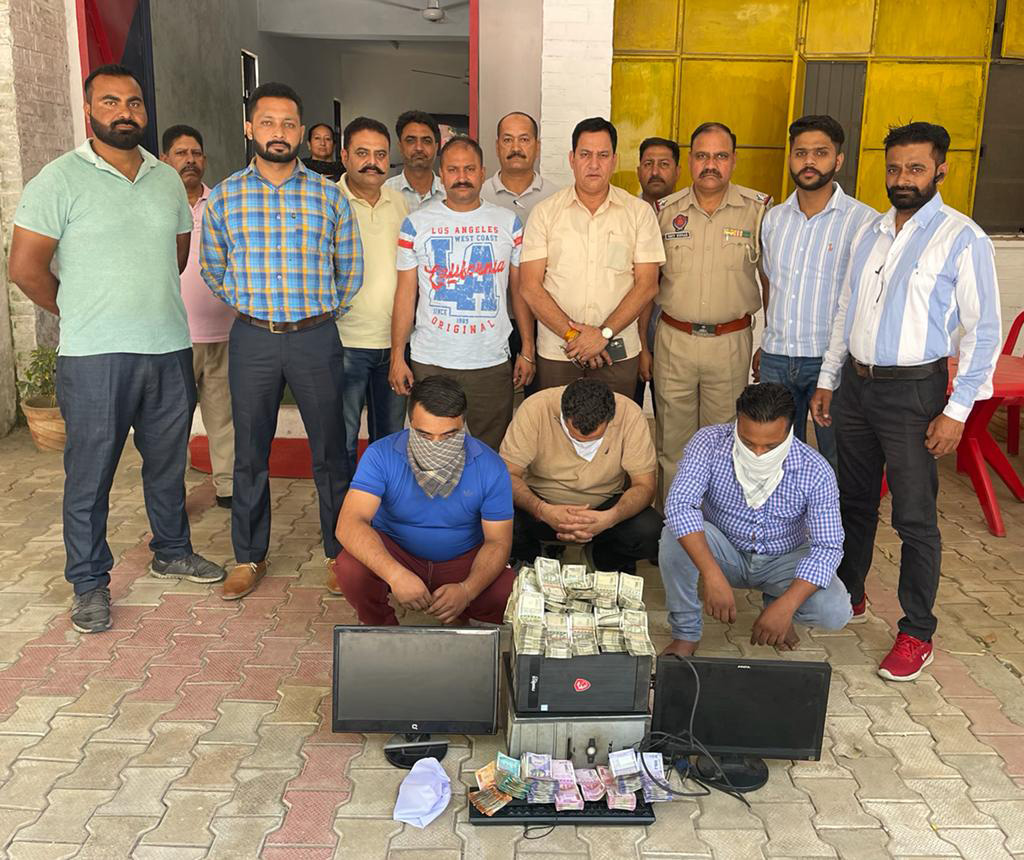 Pathankot cops with Ashok Bawa and his two accomplices.

The Pathankot police on Wednesday nabbed one of the city’s biggest ‘satta kings’, who also happens to be a BJP councillor in the Sujanpur Municipal Committee, following a well-planned operation.

Ashok Bawa, a BJP councillor from Ward No. 5, was arrested on Wednesday morning. Officers’ claim he also used to fund campaigns of leading politicians.

The BJP rank and file were not taken aback when they heard of Bawa’s arrest because it was a known fact that cops had been hot on his trail for the last few weeks.

An FIR was registered against Bawa and two of his accomplices — Vinod Kumar and Rocky Kumar — under Section 420 of the IPC (cheating) and various sections of the Public Gambling Act at the Sujanpur police station.

Residents heaved a sigh of relief when the word spread about Bawa’s arrest.

SSP Arun Saini said he had received numerous complaints from residents, particularly from the parents of unemployed youth, following which he formed a special team comprising SP (Investigation) Sohan Lal, DSP (Investigation) Sukhjinder Singh and Anil Pawar, Inspector (CIA staff) to look into the charges. In Pathankot and its adjoining towns of Sujanpur, Jhakholari, Malikpur and Sunderchak, the scandal was called the “Bawa lottery system.” Youngsters from HP and J&K used to arrive almost daily to make easy money by indulging in ‘satta’.

Police say Bawa was the kingpin who operated nearly 80 odd stalls across the twin cities of Pathankot and Sujanpur. The cops recovered Rs 18 lakh from Bawa in cash. “He also has some other illegal sources of income. My team is investigating these too,” said SSP Saini.

An officer said in the past, whenever cops came close to nabbing Bawa, politicians stepped in to thwart his arrest. “Word would travel fast and whenever we raided a particular stall, the other stalls would immediately wind up operations which made our task all the more difficult,” he said.

“This has been going on for the last several years. However, this time, we collected irrefutable evidence against Bawa. The political class, fearing embarrassment, did not deem it fit to defend him this time. It used to be a nauseating feeling seeing long lines of youngsters line up at Bawa’s stalls in the city. Now, all this has come to an end,” he said.