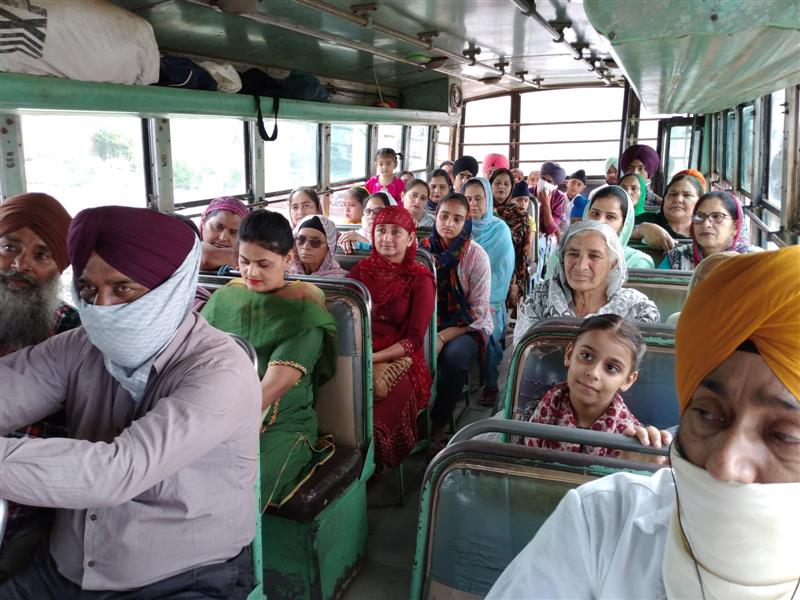 Pathankot: A two-member team of the NITI Aayog has lauded the efforts of the Pathankot administration to arrest the depleting groundwater table level across the district. Agriculture experts opined that the “stable water table” was primarily due to sowing of paddy by the direct seeding method. The team comprised Jagriti Rohit Singla, Director, NITI Aayog, and Anjali, a research fellow working with the National Institute of Hydrology (NIH). Singla has been designated as the Pathankot nodal officer. It held meetings with the district administration which was led by Deputy Commissioner Harbir Singh. The visit was part of the Jal Shakti Abhiyan, a Central government initiative aimed towards water conservation. The groundwater table in all six blocks — Narot Jaimal Singh, Bamial, Dhar Kalan, Pathankot, Gharota and Sujanpur — was taken into cognisance by the team. The consensus that emerged after two-day visit to rural areas, meetings and deliberations was that the local administration “was doing everything possible to ensure the water table doesn’t get depleted any further”. The scientific inputs were based on readings of piezometers installed across all six blocks by the hydrology section of the agriculture department. Piezometers are sensors that basically detect the level at which water is found beneath the earth’s surface. Dr Amrik Singh, Agriculture Officer, claimed that almost 458 acres had come under the direct seeding method this year in Pathankot district. “On a conservative estimate, 62 lakh litres of water is used to sow paddy on an acre of land. This means, this year we saved 54.42 crore litres of groundwater. The very existence of the Upper Bari Doab Canal canal, which originates at Madhopur and runs till Amritsar after crossing Pathankot district, also helps in maintaining stable groundwater levels. On an estimate, water can be found 5 to 17 m deep in this district which is good enough as compared to other districts of the state,” the officer said. The NITI team was impressed by the administration’s efforts to engage the farmers in the direct seeding process. Experts say this method ensures a normal harvest with substantially lower water consumption. It also does away with labour and cost-intensive operations such as nursery planting and seedling transplantation. “Likewise, it cuts down the consumption of water by 20-35 per cent. It involves lower cash input and also improves soil health and increases the crop output thereby raising net profits,” added Dr Singh.

Former MLA sets example for others

Batala: Unlike other MLAs, who lost the Assembly elections, former Qadian MLA Fateh Jung Singh Bajwa is working for the betterment of Batala city. He left the Congress after he was refused the ticket from Qadian and had joined the BJP. The party gave him the ticket from the industrial city of Batala. He lost the polls, but nevertheless is in touch with the BJP top brass in New Delhi. Two days ago he met Union Minister Hardeep Puri and urged him to set up agro-based industries in the area. The minister told him that he would talk to industry experts in this regard. “Agro industries are factories that use plant and animal-based agricultural output as their raw material. They also add value to agriculture output by processing and producing marketable products. Some good examples of agro-industries are textile, sugar, vegetable oil, tea, coffee and leather industries. We have a lot of prime land available in Batala. Hence, we should make optimum use of this land by setting up agriculture-based factories. The minister has assured me that he will look into the matter,” Fateh said. Sources say Bajwa is in touch with the people because he has been assured the BJP ticket from the Gurdaspur constituency in 2024.

Gurdaspur: The arrest of Gurdaspur SP (Headquarters) Gurmeet Singh has become the talk of the town in this city. Discussion often veers around how and why the officer has landed himself in such a dreadful situation. Three years ago, SP Salwinder Singh, who worked as SP (Headquarters) in Gurdaspur, was jailed after a woman cop alleged that he had raped her. The cops did their bit for their officer. When he was sent to a two-day police remand instead of taking him to the Gurdaspur city police station, Gurmeet was taken to his home where he spent the next 48 hours. Finally, once his police remand was over, he was shifted to the central jail on a judicial remand. Who says cops do not help fellow cops?