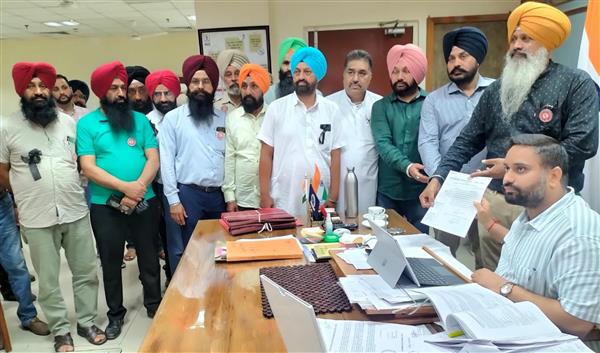 Members of the Revenue Patwar Union hand over a memorandum of their demands to the Amritsar DC on Thursday. Tribune photo

Patwaris went on a three-hour strike in the district on Thursday. They were protesting against the government move to scrap 1,056 patwar halqas in the state. They also submitted a memorandum to the DC under the banner of the Revenue Patwar Union.

The union stated that with the scrapping of the patwar halqas, the workload on the remaining staff would increase and it would also reduce job prospects of the youth.

In Tarn Taran, patwaris of the Revenue Department under the banner of district unit of the Revenue Patwar Union, Punjab, organised a dharna in the District Administrative Complex here today. They were seeking fulfilment of their demands. The union also submitted a memorandum to the state government through the Deputy Commissioner. & OC