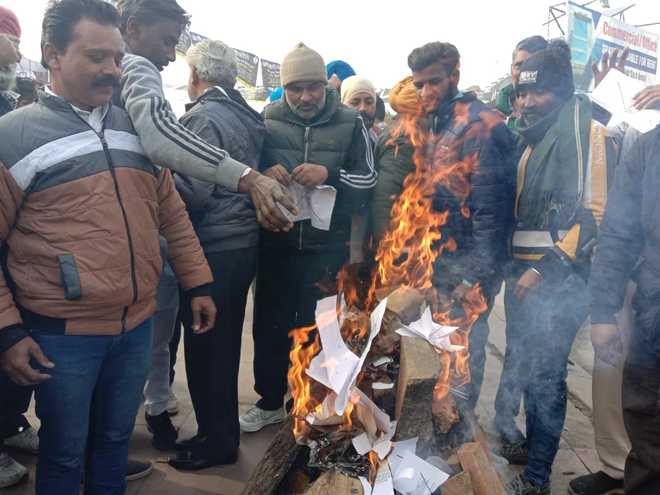 AAP volunteers of the district, to observe Black Lohri in Amritsar. Tribune photo

On the occasion of Lohri, farmers and people from different walks of life burnt copies of the three farm laws in protest here on Wednesday.

Baldev Singh, a farmers’ leader, demanded his resignation from one of the two positions. He said the college was raised with the contribution of farmers and the KMSC would not allow any BJP leader to lead an organisation of the Sikh community.

Activists of different farmer organisations burnt copies of the farm laws in various villages of the district. Similarly, such an event was also held at Holy City locality.

Raj Kumar Verka, MLA West, Senior Deputy Mayor Raman Bakshi and others gathered at Ward No.80 to consign the copies of farm laws to the bonfire.

AAP volunteers of the district observed Black Lohri as a protest against the anti-farmer laws passed by the Narendra Modi government. Activists of the Dal Khalsa and its youth wing, Sikh Youth Punjab (SYP), burnt 100 copies of the contentious farm laws and demanded the revocation of the agriculture laws.

Activists raised slogans such as “down with the fascist BJP government”. They termed the Narendra Modi government as authoritarian and blamed it for promoting crony capitalism. They carried big placards reading ‘Mr Modi shun ego, roll back farm laws’.

Members of the Democratic Teachers’ Front used the Lohri festival to raise voice against the three contentious laws. — TNS