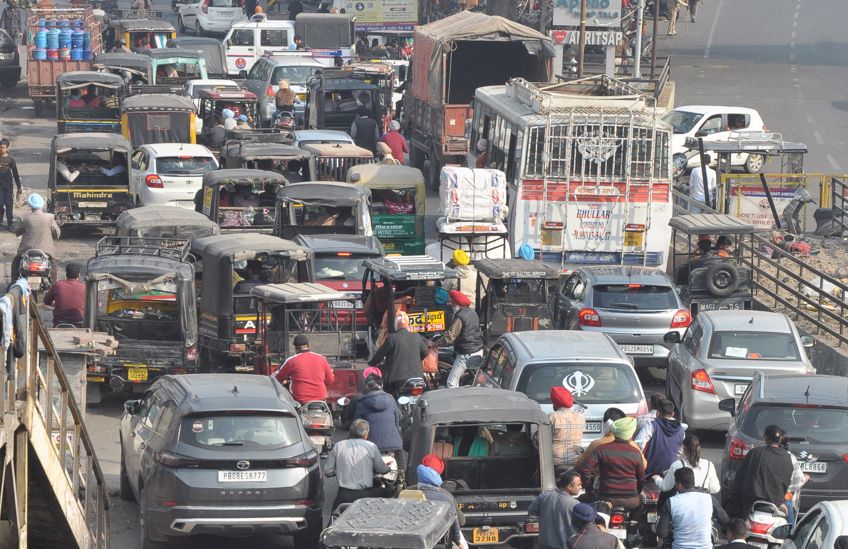 Commuters stuck in a traffic jam near the railway station in Amritsar. - File photo

Despite the Union Government-funded mega infrastructure projects like the elevated road, bus rapid transit system (BRTS) and smart city being implemented, traffic situation in the city is increasingly becoming hard to control because of its haphazard expansion.

Experts blame the present mess to not complying with the rule book. Most of these rules were contained in the Master Plan (MP). Adopted over a decade ago, the Master Plan did not elicit the desired results due to its limited implementation. Experts say the panacea lies in planned expansion of the city as per Amritsar’s Master Plan.

Rawal Singh Aulakh, assistant professor in department of architecture, GNDU, said there should be synchronisation of all infrastructure projects taking shape in the city, the golden rule being no infrastructure development succeeds in isolation. So all projects must be approved by the Amritsar Development Authority (ADA) in light of the Master Plan.

Presently, the Master Plan comes in use only when the CLU (change of land use) is to be done for transforming a residential into commerical area. The need of the hour is to blend a futuristic approach with technology. A technological approach does not find mention in the Master Plan. At a point of time, multiple agencies are involved and one of them dictates terms, a sad part of any development project. The Master Plan must have a separate heritage plan for the walled city, another for the area outside the walled city which stretches up to the bypasses and the peri-urban, that is beyond the bypasses.

Dr Sakshi Sahni, assistant profesor in GNDU’s Sri Guru Ramdas School of Planning, said the BRTS was proving to be a white elephant and a duress on limited infrastructure of the city, reason being the norms of town planning were not being complied with before its introduction. Autos and BRTS run in the same lanes.

As per the norms, such a huge mass public transport system is introduced in those cities where peak hour traffic reaches 35,000 passengers. It was not the case with this city, yet the service was introduced. Compounding the problem, auto-rickshaws were being plied even on roads which have BRTS lanes. As per the rule book, autos should work to provide passengers to the BRTS. Stakeholders like shopkeepers and auto drivers were not taken into confidence before the introduction of the BRTS. Junctions are set up at a distance of one kilometre and beyond on the route of the BRTS which is a great bottleneck in its success.