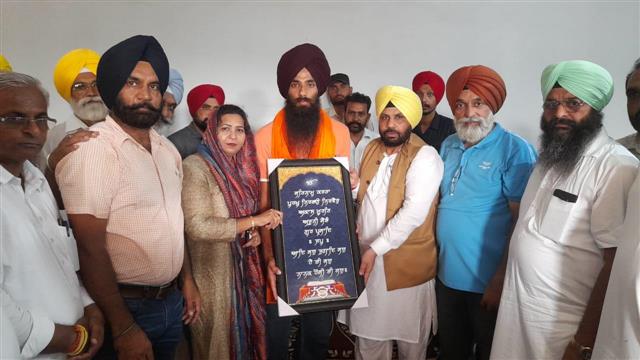 Cabinet Minister Harbhajan Singh ETO on Friday visited hockey player Jarmanpreet Singh at his house in Rajdhan to honour him for his performance in the Commonwealth Games.

After presenting a memento and a siropa to Jarmanpreet, Harbhajan Singh ETO announced that a well-equipped hockey field would be built in Rajdhan to encourage more youths from the village to take up hockey. “Players like Jarmanpreet and others from the district, who have contributed immensely to various sports and won medals, are an inspiration for many,” said Harbhajan.

He announced that Punjab-level sports fair would be organised soon in which, competitions would be held in various sports events and categories. The winning team in each event would be rewarded a cash prize of Rs 5 crore.

“This sports fair has been designed to identify the skills of village youths, create a sports-friendly environment and health awareness, from which future players like Jarmanpreet Singh will be born,” said ETO.

He invited the youth of the villages to actively participate in this sports fair. He said this registration could be done till August 25 through online portals.