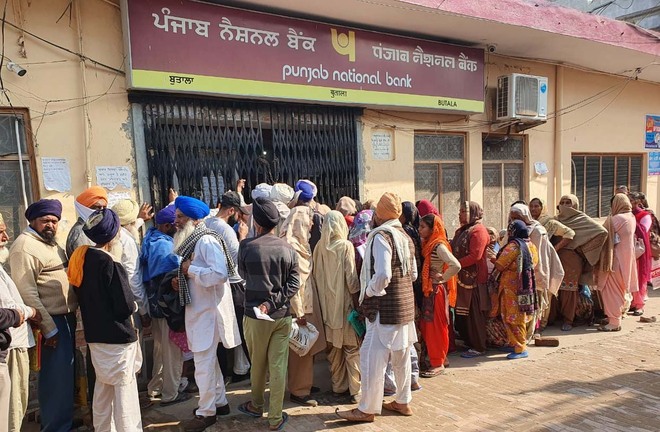 Account holders stand in long queues outside the PNB’s branch at Butala village near Amritsar.

Manjit Singh, a resident of Butala village, left behind his farming and domestic work to stand in the serpentine queue out of the PNB’s branch in the village.

“Banking work is very important as it concerns advance taken from the bank but at the same time fields need to be attended for the next crop,” he said.

He had visited the branch last week. However, seeing the long queue he abandoned the plan to stand which would have cost him other works dear. So today, he came early in the morning to get the work done. He felt that it would still take at least two to three hours for his turn to come.

His is not the only such case — account holders of about 22 villages are complaining of long processing work and queues to negotiate for their banking work. The residents have even shot off a communique to the bank authorities seeking end to the problem of long waiting period at the bank branch. They stated that “the staff strength in the bank’s branch is insufficient and creates difficulties for the account holders”. The people come at 5 am yet they have to wait till evening. Many even closed their accounts and shifted it to the branch of a private bank. The picture is clear — more staff is needed at the PNB’s branch in Butala village for the convenience of the natives.

The branch is not an ordinary one as its annual turnover stands at Rs130 crore and the number of account holders are close to 34,000. The working of the branch was hit after two officials were transferred. This put tremendous pressure on the remaining staff compelling them to put several workers on the back burner. Being the only state-run bank in the cluster of 22 villages, it deals with disbursement of all kinds of central and state government grants concerning banking.

Ranjit Singh, circle head, PNB, said two replacements, including an officer and a clerk, have been approved for the branch and they would join within a week.