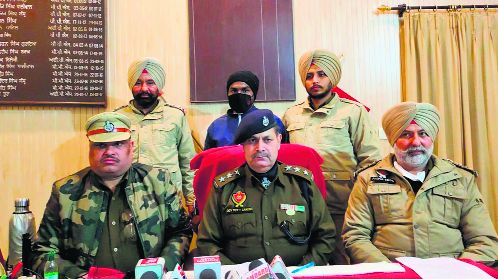 With the arrest of one person, the cantonment police on Saturday claimed to have solved a two-month-old dacoity case in which a textile trader and his family was looted at gunpoint after holding them hostage.

The accused was identified as Shami, alias Aman alias Amu, of Ram Nagar Colony in Islamabad area here. He was currently lodged in the Amritsar Central Jail. He was arrested in the dentist Dr Shivangi Arora robbery case that rocked the holy city earlier this month.

The dentist, along with her family members, was held hostage at gunpoint at their residence in posh Shastri Nagar locality situated near Lawrence Road here.

Assistant Commissioner of Police Dev Dutt Sharma said the police examined the footage of a CCTV installed near the residence of textile trader Devinder Singh Bedi, a resident of Guru Arjan Dev Nagar area near Putlighar. The incident had occurred on November 6.

“The CCTV footage hinted at the involvement of Shami in the case,” said the ACP, adding that he was brought on production warrant and arrested. His interrogation helped in cracking the case.

Besides, others who were wanted in the case include Dildar Singh of Krishna Nagar, near 22 number railway crossing, Vikramjit Singh alias TT of Mustafabad, Shera of Lahori Gate and his one friend.

On November 6, around five armed persons robbed a trader’s family in Guru Arjan Dev Nagar area after holding them hostage. The miscreants gained entry into the house by posing as sewer cleaners. The victim, Devinder Singh Bedi, a textile trader, was at his house along with his wife, daughter-in-law and two grandchildren. The accused reportedly looted jewellery and cash worth Rs 8 lakh from the family. The accused also took away a digital video recorder of CCTV cameras.

Assistant Commissioner of Police Dev Dutt said the accused had decamped with Rs 8.5 lakh, besides gold ornaments from the house. They had left their datar after the crime and also damaged the DVR.

He said Shami was arrested by the police in connection with the dacoity at the residence of Dr Shivangi Arora. He said his interrogation revealed that he, along with Dildar Singh, Vikramjit Singh, Shera and his friend had committed the robbery. He said raids were on to nab the other accused who were still on the run.