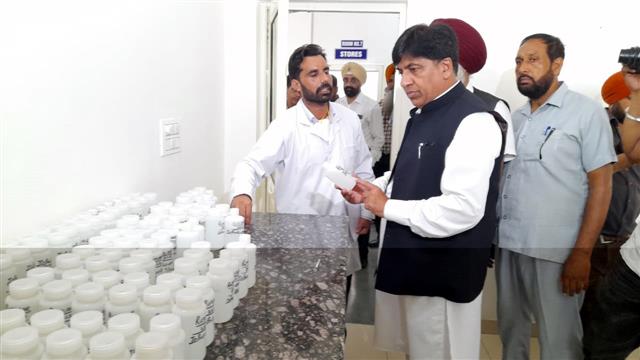 Minister for Revenue and Water Supply Brahm Shankar Jimpa has said all villages and cities of the state would be provided with clean drinking water from canals.

While inspecting a canal water project being constructed at Majupura village near here on Monday, he said at present, 15 projects were underway to make canal water potable.

He said around 1,700 villages of Amritsar, Tarn Taran, Gurdaspur, Patiala, Fatehgarh Sahib, Fazilka and Ferozepur districts would get potable canal water through these projects. The minister said Rs 1,100 crore was being invested to provide improved quality water in the entire state.

“Four canal water-based schemes worth Rs 378 crore will provide potable water to 369 villages here. The private companies engaged in this work have been given a period of 10 years for water supply. This will ensure uninterrupted water supply,” said the minister.

Arrangements for water sampling and testing have been made from time to time. He said in the areas of the state where water is not drinkable, RO systems should be installed immediately. He said in many arsenic-affected areas, with the assistance of IIT-Chennai, arsenic-cum-iron removal plants were being installed to provide clean drinking water.

Earlier, while inspecting the work of the Regional Water Testing Laboratory, Jimpa said one state-level, six regional, 17 district-level and seven block-level laboratories were working in Punjab to test the purity of water. He appealed to people to take advantage of these laboratories.

Among others, MLAs Jaswinder Singh and Jeevan Jyot Kaur and Principal Secretary of the department DK Tiwari were also present.