Set up in the early 80s, the area houses 700 shops, vends and kiosks 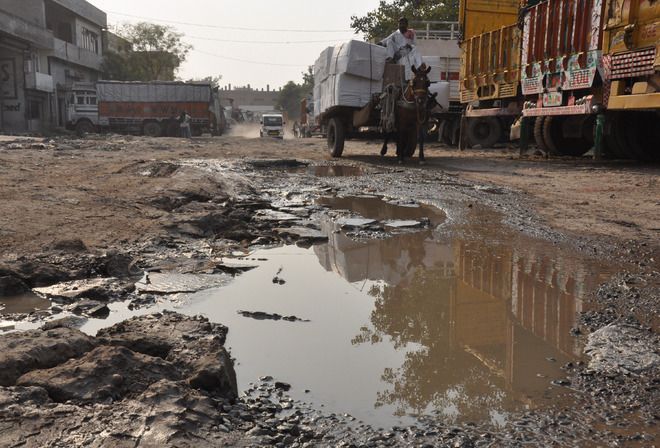 Deplorable condition of roads in the Jahajgarh area in Amritsar. Sunil kumar

Potholed roads with their margins filled with sand are a common sight as you enter Sardar Jai Inder Singh Transport Nagar, popularly known as Jahajgarh.

Anantdeep Singh, a transporter, said some roads were repaired during the tenure of the then Chief Parliamentary Secretary (CPS), Dr Navjot Kaur Sidhu, which were in a dilapidated state now. Major portions of the roads and parks had been encroached upon. Motorcyclists often faced the issue of breakdown of their vehicles.

He said the Transporters’ Welfare Association, Amritsar, under the aegis of the All-India Motor Transport Congress (AIMTC), had submitted memorandums to the authorities on several occasions, but no action had been taken so far. The condition of the roads had turned from bad to worse.

Even after light showers, it becomes a nightmare to enter the area and roads turn into pools. Locals said one of the internal roads led to the Ghee Mandi area and a number of motorists used the route on a daily basis. In the absence of any repair, the road had damaged further.

The Transport Nagar was established in the early 1980s with the twin objectives of providing a planned transport area and to decongest the city. However, the administration has failed to shift repair workshops, goods carrier offices and booking offices of heavy vehicles to some other place.

Rajesh Shoor, another transporter, said other dealers had occupied the area that was exclusively set up for transporters. There were 700 shops, vends and kiosks in the area and of these only 150 belonged to transporters.

On the other hand, transport companies and workshops had come up in other parts of the city, leading to the congestion.

Dinesh Bassi, chairman of the Amritsar Improvement Trust (AIT), said some encroachments had been removed from the Jahajgarh area while the remaining would soon be removed. Two SDOs had been asked to chalk out a scheme and the Trust would invest Rs 10 crore under it for the overall development of its civic amenities, including roads.