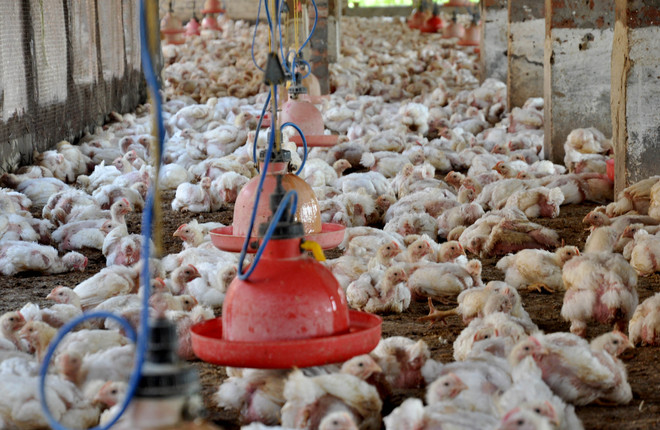 A view of poultry farm in Amritsar on Monday. Photo. Sunil kumar

The livestock profession such as poultry has been in doldrums as the sale of eggs and broilers witnessed a huge decline. Though it falls under the category of essential services, yet cops on duty do not allow it as shops are yet to open.

Baljit Singh Bittu, a retail butcher, said cops did not allow the shops to open on Saturday and weekend, which deteriorated the quality of broiler and mutton.

So, a delegation of the Amritsar Poultry Association, led by its district President GS Bedi, today met Jagmohan Singh, Deputy Commissioner of Police (DCP), requesting him to allow these shops to open to curtail their losses.

Bedi said the police and district administration besides governments, need to understand that the poultry farmers were dealing in livestock, delay at any level could cause immense financial losses to the farmers.

He said the loss of two days of trading in a week was immense as already Tuesday and Thursday were dry days as people do not consume non-vegetarian food due to religious beliefs. It meant that they got only three days for selling livestock in a week.

He elaborated that annually they got only 200 days for sale as 165 days fall on Tuesday, Thursday, Sawan, Navratra and other religious occasions.

The DCP assured the delegation to forward their demand to let their shops open on the weekend.