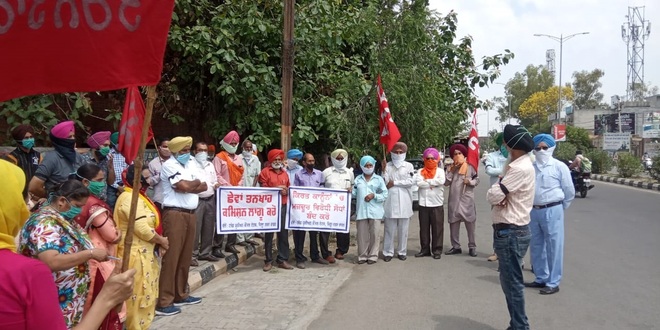 On a call for a nationwide agitation against the proposed amendment to the Electricity Act, employees of Powercom staged protests in the areas by wearing black badges.

Farmers under the banner of the Kisan Mazdoor Sangharsh Committee, Punjab, also staged protests at the subdivisions of Powercom.

Gurpreet Singh Gandiwind, a member of the Powercom employees’ union, said the Union Government had made a passage to get the Bill passed in Parliament, which is a way towards privatisation of the power sector. He said with this, people will have to shell out more money for bills and employees will be exploited.

Satnam Singh Manochahal, a protester, said that the farmers under the banner of the Kisan Mazdoor Sangharash Committee presented memorandums to officials and demanded the rollback of the proposed amendment keeping in view the interests of the countrymen.