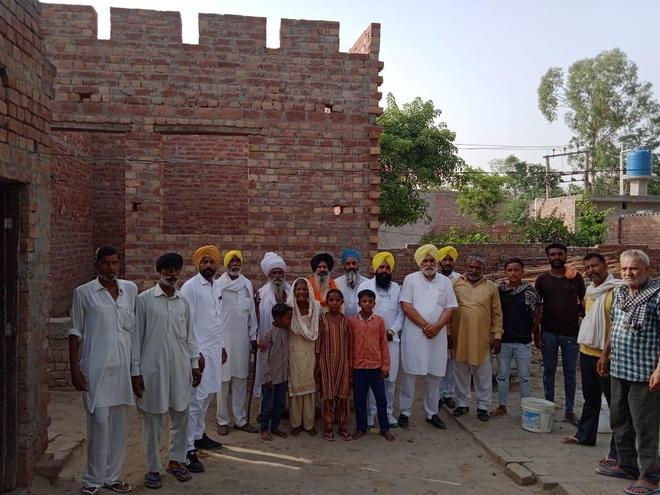 Shelter for homeless? Construction of a house of one of the beneficiaries under the Pradhan Mantri Awas Yojana has been left midway at Khemkaran.

The Central Government has played a cruel joke on the poor on the promise of providing a free house to the identified beneficiaries of Khemkaran town under the Pradhan Mantri Awas Yojana. Under this much advertised scheme, people living in urban areas are eligible to get financial aid to make their pakka house till March 2022. Kamaljit Singh, Executive Officer, Nagar Panchayat Khemkaran, said 800 families were identified under the scheme. He said Central assistance of Rs 1.5 lakh per house was to be provided by the Central government in instalments. The process of making 332 pakka houses in the town was started about four years back. The officer claimed that the work on only 90 houses had been completed so far. Balwinder Singh, son of Ajaib Sibngh; Swarno, wife of Piara Singh; Kabal Singh, son of Jaimal Singh; Binder Singh, son of Gopal Singh; Dalaur Singh, son of Barkat Singh; Bimla, wife of Sawaran Singh; Major Singh, son of Karnail Singh; and many others said they had been waiting for the next instalment since more than three years. Besides, they had approached officials of the Nagar Panchayat to help in providing next instalment of money for the construction of their houses. The beneficiaries alleged that the grants were being given with biased attitude. The beneficiaries alleged that they were forced to give ‘bribe’ to take the previous instalments. Alam Ajay Singh Sandhu, president of the Nagar Panchayat, said the left out beneficiaries were not providing their required documents for which they were unable to get next instalment. Jasbir Singh Sursing, leader of AAP, alleged the scheme had been politicised. He warned that in case the families were not given due instalments shortly the residents would be helpless to lodge protest against the administration soon.

Vinod Kumar Sharma, a social worker and resident of Patti town, who succumbed to Covid about 10 days ago, would be remembered by people for a long time. Vinod Sharma was working as patwari and was known for his honesty. He started donating blood at younger age and registered his name with the Civil Hospital, Patti, for voluntary blood donations. With his help, the residents formed the Bhagat Pooran Singh Khoondan (Blood Donation) Committee, Patti, in 1994. The committee performed well and managed to donate 72,000 units of blood till 2020 to different hospitals in the state and other parts of the country. He himself had donated blood 100 times. He had been providing food to the needy under ‘Bibi Rajni Da Chullha‘ (Kitchen of Bibi Rajni) in Tarn Taran, Patti, and other places in the district. He was seen in social service all times, besides his official duty. He was honoured for his selfless services several times.

A Deputy District Attorney with a tender heart

Gurpreet Singh Rana, Deputy District Attorney, Tarn Taran, remains in search of needy students to extend them financial aid to carry on their studies. He himself faced a lot of problems from childhood and it was due to this that he adopted the way to make him mentally satisfied. His father expired when he was just six years old. His mother, who was a government school teacher, brought up her two sons with great care. Rana took his secondary from the Punjab School Education Board and did his graduation from SGAD Government College, Tarn Taran. He topped the law degree from Guru Nanak Dev University in 1998 and then started law practice. He was selected as an Additional District Attorney in 2006 and was now Deputy District Attorney in Tarn Taran. He was a nature lover with kitchen garden in his home and swimming is his habit. He has appealed the students to approach him for financial help in case of need.

Dhruman H Nimbale, SSP, Tarn Tran, has expressed his satisfaction over adopting wearing mask and other precautions against Covid as the natural habit by the people. The district police head was on his way to his office recently when he saw a tiny tot going on foot with her grandmother wearing mask. The SSP stopped his official vehicle near the tiny girl and inquired the reason of wearing mask by her. Her grandmother told SSP that she (the girl) was deaf and dumb and cannot tell anything. “It was her habit to wear mask and maintain social distancing even at home and wash her hands often,” said her grandmother to the SSP. She said they had sufficient stock of mask and sanitisers in the house and the girl often distributes mask to people not wearing the mask in the locality. The duo was going to have medicine from the hospital for the girl who was under treatment.