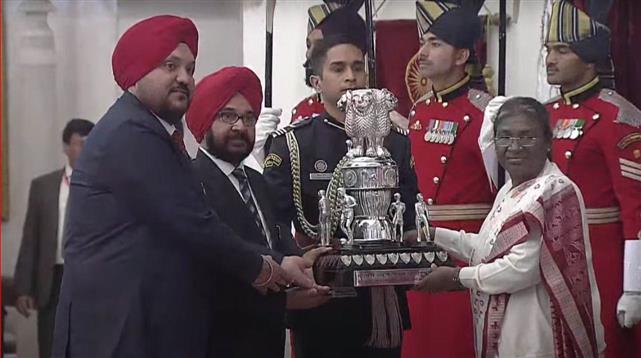 President Droupadi Murmu on Wednesday presented the coveted “Maulana Abul Kalam Azad Trophy” (MAKA) to the Guru Nanak Dev University for its all-round best performance in sports for the year 2021-22 in an investiture ceremony held at Ashoka Hall of the Rashtrapati Bhawan this evening. The university received the award for a record 24th time.

Vice-Chancellor Jaspal Singh Sandhu and Dr Kanwar Mandeep Singh, in-charge, Sports Department of the University, received this trophy. The replica of trophy and award money of Rs 15 lakh was also presented to the university by the President for the promotion and development of sports. Before the presentation of award, a citation was also read out depicting the commendable sports achievements of the University.

Prof Sandhu congratulated sports personal, affiliated colleges, their principals, faculty, coaches, students and the University Sports Department for their sincere contribution. He said the honour is not only for the university alone, but it is also for the whole of Punjab.