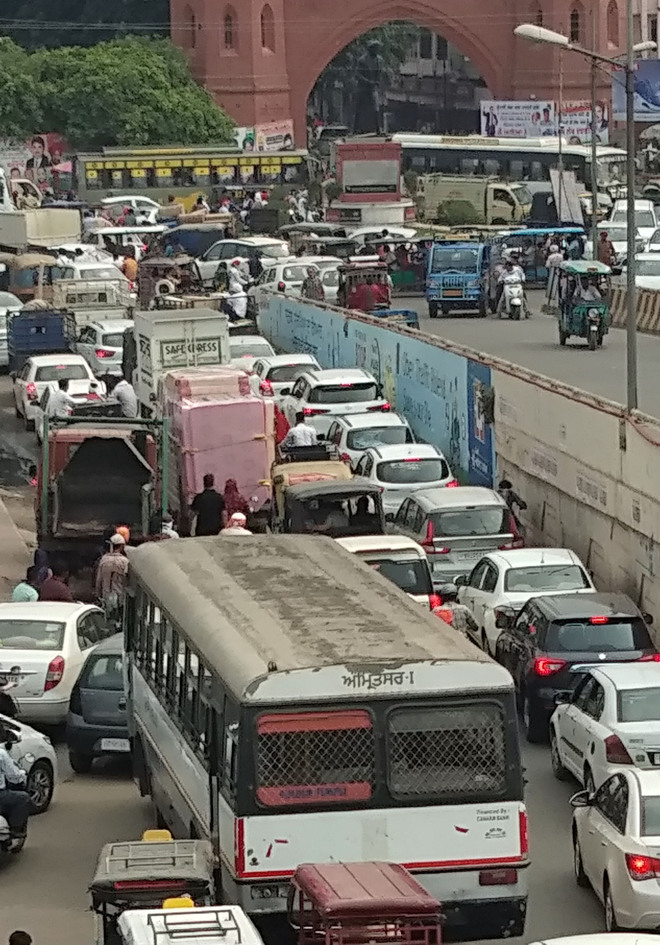 Commuters stuck in a traffic jam as members of the Valmiki Samaj staged a protest on Bhandari bridge in Amritsar on Tuesday.

Traffic remained affected after chief of Valmiki Samaj Rishi Mattu held a demonstration on Bhandari bridge today over the police inaction against a cop who allegedly slapped him.

Mattu said he had filed a complaint with the Police Commissioner in this connection, but alleged no action has been taken against Assistant Sub-Inspector Prem Singh, who is posted at Majitha Road police station.

The dharna was lifted after Additional Deputy Commissioner of Police Harpal Singh reached the spot and assured him of appropriate action while stating that the statement of the Mattu was being recorded.

An ambulance was also stuck in the jam at Tylor Road chowk. Traffic from Tylor Road and Mall Road and commuters coming from Novelty Chowk converged at the chowk, thus leading to massive blockade. Mattu said a few days ago two auto-rickshaw drivers had a spat. He said he had come to the police station for striking a compromise between the warring groups. Mattu alleged that the ASI (Investigating Officer) used foul language and slapped him.

Agitated over this, Mattu had held the protest outside the police station, while senior police official promised to take action against the rring cop. The Additional Deputy Commissioner of Police said he has asked for a departmental probe against the ASI after recording the statement of Mattu.