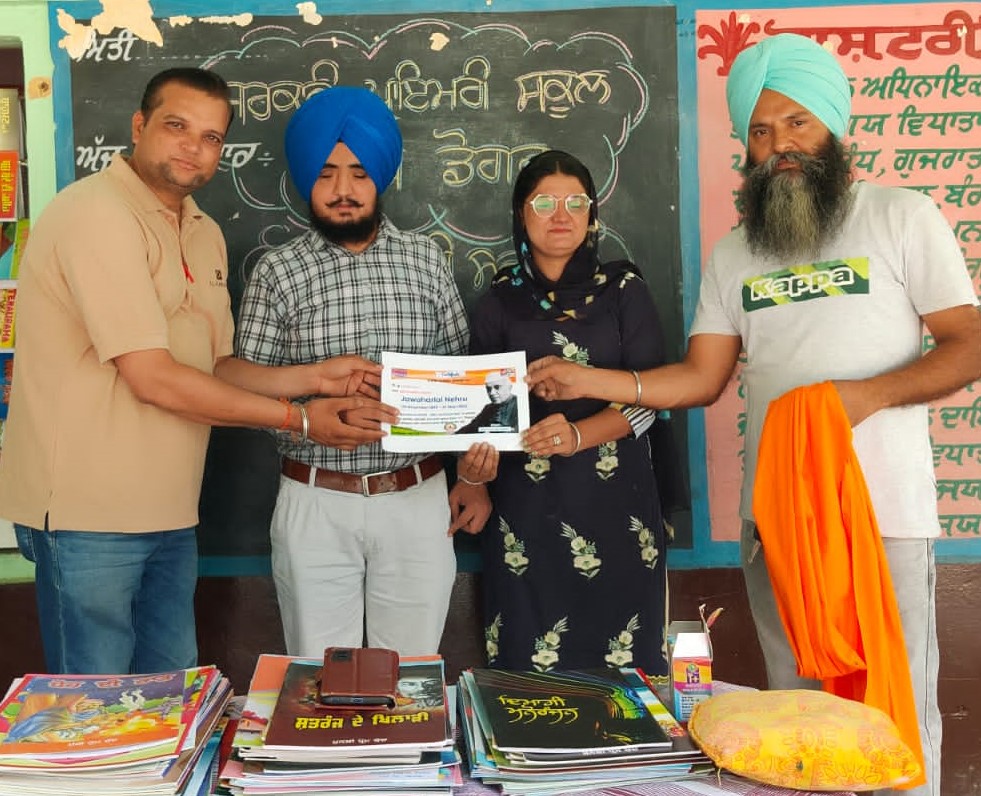 Students with their medals. Tribune photo

Tarn Taran: Sarabjit Kaur, a teacher of Government Elementary School (GES), Khabbe Dogran, was awarded third position in Punjab in the e-learning Pandit Jawaharlal Nehru memory-based online quiz competition organised by State Innovation and Research (SIR) foundation, Maharashtra. Bhushan Kumar, Head Teacher of the school, said candidates from across the nation participated in the competition. Sarabjit Kaur won the third position in Punjab. Sarabjit was honoured during a function organised in the school on Tuesday. OC

Lecture on World No Tobacco Day

Amritsar: National Service Scheme (NSS) Unit II of Guru Nanak Dev University along with School of Social Sciences and the Department of Sociology (Masters in Social Work Programme) on Tuesday organised a special lecture in collaboration with the Generation Saviour Association (GSA), Sahibzada Ajit Singh Nagar, to celebrate World No Tobacco Day. The speaker was Opinder Kaur, Director (Programmes) of the association. Dr Opinder Kaur said, “Tobacco is a social menace and there is no bravery in being adventurous with your health and putting it under threat by consuming tobacco.” More than 28 lakh people consume tobacco in Punjab and around 1.35 million die daily in the country as per the WHO figures. She also cautioned the audience against the problem that tobacco waste generates in itself and how problematic it is to manage it. She also talked about the role played by peer pressure in pushing youngsters towards this menace. She also cautioned the students against the new emerging trend of e-cigarettes and herbal hookahs, which are equally harmful. She concluded her lecture by mentioning about helpline numbers and quit line numbers to help remove tobacco as a social problem.

DAV College, Amritsar, has been ranked 4th in Punjab in the category of non-autonomous colleges in its ranking by Education World India. Dr Rajesh, principal, DAV College, expressed gratitude to staff members for this ranking of the college, due to the hard work of whom the college has reached this position. In a programme held in Gurugram, Dr Rajesh received the award from the team of Education World India. Dr Rajesh informed that in order to motivate, assist and enable Class XII students to select most suitable undergraduate colleges, from 2018 onwards Education World has recognised India’s top 500 arts, science and commerce, and engineering colleges as the top 500 arts, science & commerce, and engineering colleges of India. It is giving ratings on several important parameters and ranking them in different categories. Getting the fourth position is a proud moment for the college.

Principal Director Dr Anita Bhalla, Bhavans conducted a two-day workshop on the implementation of Annual Pedagogical Plan for the Bhavans’ staff from May 29. Harpreet Kaur, PGT (Chemistry) and CBSE awardee 2021, was the resource person, who delivered an informative lecture on the action research in which she laid stress on improving academic performance. Further, she explained about the Johari window where she told the present audience regarding the use of different tools to build self-awareness and ways of enhancing learning outcomes. Teachers took active participation in the session by clearing their doubts. The Principal Director, Dr Anita Bhalla, appreciated the efforts put in by Harpreet Kaur for making the session interactive. The overall session was quite informative and productive. The participants were also awarded certificates.