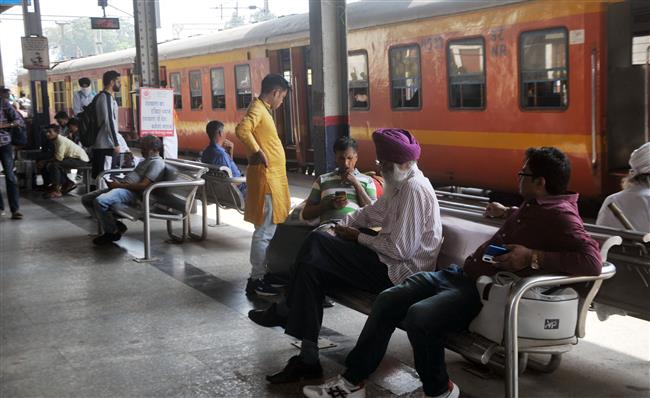 Passengers wait for their trains at the Amritsar railway station.

The movement of trains on the Amritsar-Delhi route was disrupted following the railway blockade by activists of the Kisan Mazdoor Sangharsh Committee to impress upon the government to accept their demands here on Monday.

Passengers were greatly inconvenienced. Those intended to travel within the district preferred journeys in buses. A passenger, Harjeet Singh, said tickets of his family members to undertake journey to the NCR to attend a family function were already booked. However, the sudden disruption of rail traffic due to blockade came as a rude shock to them. He said they did not have any other alternative, but to await at the railway station for the rail traffic to resume.

Farmers under the banner of Kisan Mazdoor Sangharsh Committee, Punjab, held dharnas on rail tracks in Tarn Taran, Patti, Khadoor Sahib and Khemkaran in which a huge number of women and young farmers too participated.

Addressing on the occasion in Tarn Taran, Satnam Singh Manochahal, district president of the KMSC, condemned the Union and the state governments for their alleged anti-farmers policies. He said both Union and state governments were not serious about protecting the farmers’ interests as a result of which farming was going to be a dying profession.

He said governments were introducing pro-corporate sector policies at the cost of farmers.

Lashing out at the AAP-led Punjab Government, Satnam Singh Manochahal warned the government against allotting land to panchayats as it was made cultivable with decades of hard work of farmers. He said farmers of the state would resist the state government move in case it tried to snatch farmers’ land, which they had been tilling for decades, but now the state government had passed an act under Punjab Village (Rural) Common Land Act, 1948, to take back their land which they cultivated for the last six to seven decades.

The farmers unions associated with the Sanyukt Kisan Morcha (SKM) too organised a dharna in front of the District Administrative Complex and presented a memorandum to district officials. /OC