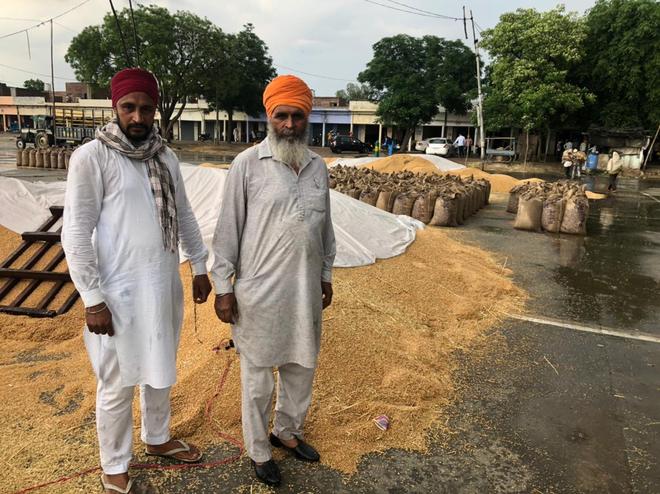 Tarn Taran: Untimely rain on Saturday caused damage to procured produce lying at the mandis and standing wheat crop in the fields. Unseasonal rain caused damage to wheat crop in Chabal, Sarai Amanat Khan, Bhikhiwind, Khemkaran, Khalra, Valtoha, Harike, Choha Sahib, Khadoor Sahib, Sarhali and other areas of the district. Tejinderpal Singh Raju of Rasulpur village said the farmers had postponed the harvesting of the crop for atleast three-four days. He demanded immediate girdawari for assessing crop loss due to rain. Chief Agriculture Officer Kuljit Singh Saini said that as he was on leave so he had no information regarding the loss with Saturday’s rain. Mohkam Singh and Sharanjit Singh, farmers from Bundala village who had brought their wheat to the mandi said there was no arrangement to protect farmers produce from rain in the local grain market. The procurement agencies are not ready to buy damaged grain with moisture higher than permissible limit. Meanwhile, heavy hailstorm lashed the border town of Patti and other villages on Saturday, reducing the temperature by a few degrees, thereby increasing moisture in the wheat produce. Other areas that received hailstorm include Khalra, Harike, Khemkaran, Rajoke, Rattoke and Varnala among others. OC