Rescued from Company Bagh, sambar dies on way to forest 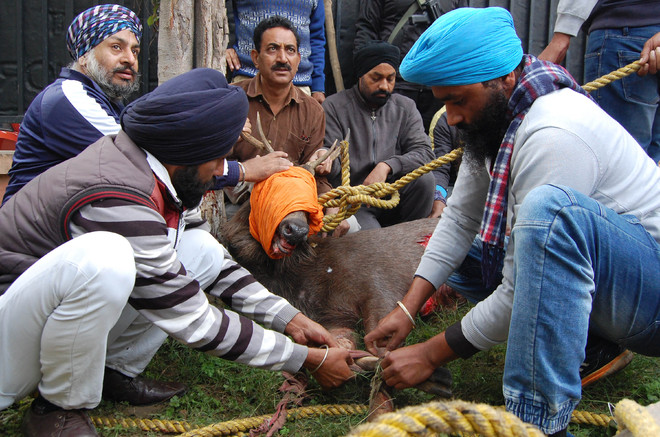 Forest Department officials rescue an injured sambar which had strayed into Company Bagh in Amritsar on Wednesday.

A sambar, which was on Wednesday rescued from the historic Ram Bagh, popularly known as Company Bagh, died while being taken to be released into a forest area.

District Forest Officer Surjit Singh Sahota said an injured sambar was recovered from the Bagh area after being alerted by staff and people over there. Officials of the Forest Department rushed immediately over there and recovered it. However, it had sustained injuries and bruises. So it was administered first aid and as per the norms was taken to be released into a forest area.

Sahota said the sambar was a shy and timid animal, which tends to suffer cardiac arrest owing to human handling. So, it was immediately taken to a forest area.

Frequent sightings of protected animals like sambar deer, nilgai and wild boar in densely populated areas of the state has pointed towards the failure of the government to secure their habitat.

The population of protected animals like sambars and wild boars has increased in the forest area of the border districts of Amritsar and Tarn Taran. The District Forest Officer, looking after forest areas of both districts, said all three of them were herbivorous and their population was increasing as no carnivorous animal was available in local forests, called Rakh in Punjabi.