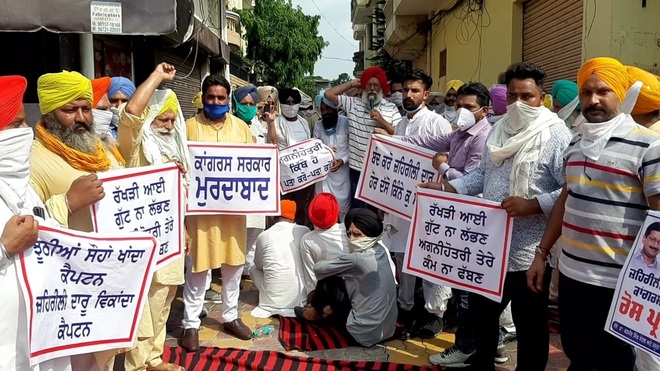 Workers of the Aam Aadmi Party under the leadership of Dr Kashmir Singh Sohal, local Halqa in-charge of the party, protested against the deaths of innocent persons after consuming spurious liquor and gheraoed the residence of local MLA Dr Dharambeer Agnihotri for hours here on Tuesday.

The police had installed barricades to prohibit the protesters from reaching the MLA’s residence but they managed to reach it ignoring all the restrictions. While addressing the protesters on the occasion, Dr Sohal condemned the incident and expressed his deepest sympathy to the bereaved families.

He alleged that the state government was responsible for it. The illicit liquor trade was being run with the connivance of leaders of the ruling party and officials of the police and the administration. The AAP leader demanded a compensation of Rs 20 lakh and a government job for kin of the victims.

As the MLA was not available due to being infected with the virus, the protesters handed over the memorandum to the DSP on duty. Other leaders of the party also addressed the gathering on the occasion.