Repaired eight years ago, stretches on GT Road in a shambles for want of proper upkeep 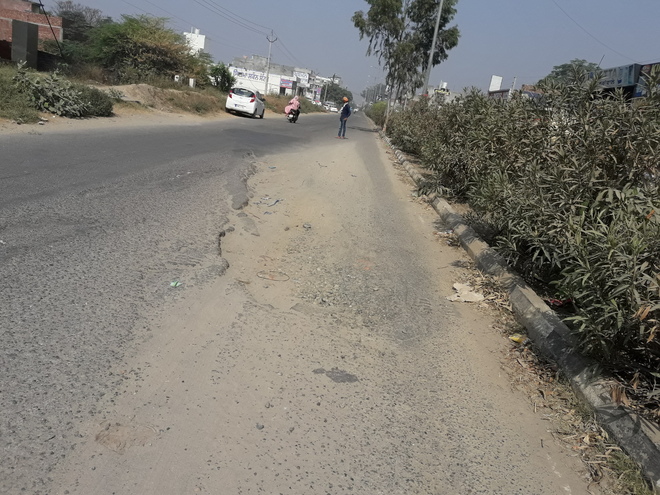 GT Road, which is the lifeline of the town, is in bad shape and posing threat to commuters.

Residents of the town are a disturbed lot as the GT road, which is the lifeline of the town, is in bad shape and is causing trouble to them. Besides, to add more trouble to the residents, it has been encroached upon by vendors. Parking of vehicles on either side of the road has become a threat to commuters. From the Amritsar-Chabal bypass to Sarhali bypass at T-point, the road was about 5-km-long with two bridges on the Kasur drain.

Eight years ago, the state government got it repaired, giving it a new look. From constructing storm sewer lines to providing dividers to widening of the bridges on Kasur drain on both Sarhali and Amritsar sides to installing of interlocking tiles alongside the road almost all works were done here at a cost of over Rs 25 crore.

No one had thought then that after eight years the road would turn into a pitiable condition with potholes dotting after a space of every few inches and depressions noticeable at many points with. Even encroachments on a large scale were never expected.

Milkha Singh, owner of Kandiala Electric Works on the Amritsar road in front of the Modern Diagnostic Centre, and his fellow shopkeepers pointing at the broken site said the road had been in such a terrible condition for the last six years and in spite of repeated requests to PWD officials and politicians, earth mixed with sand was filled in potholes. As a result, shopkeepers along the road had to face the problem of dust raised by passing vehicles, making their lives miserable in the winter season.

Besides the potholes, the Sarhali road is broken and has depressions at many places. Gursewak Singh, a resident of the road, said the road had depressions as deep as 50 feet for the last two years but the authorities never bothered about repairing it properly. He said after repeated complaints, the authorities got the caved-in portion filled with garbage a year ago, making the matter painful. It emitted foul smell for months. He said those living nearby the road and shopkeepers hesitated over complaining to the authorities concerned in this regard.

Nirmal Singh, who lives in front of St. Francis School, said whenever the road was dug up for linking a new storm sewerage connection with the pipes, it was not repaired leading to road accidents. He said the road seemed to have been encroached on a permanent basis. He said that during the lockdown period, the local Municipal Council authorities had removed all encroachments at the Kasur drain towards the Amritsar side but it had been encroached upon again. Tara Singh Khehra of the town said the divider was broken by the MC authorities without the consent of the PWD just for political considerations.

Sharanjit Singh, Assistant Engineer, PWD, said the 10-year-time limit of the road was going to end and then it would be renovated.