Restriction on Rego Bridge to add to traffic woes in city : The Tribune India 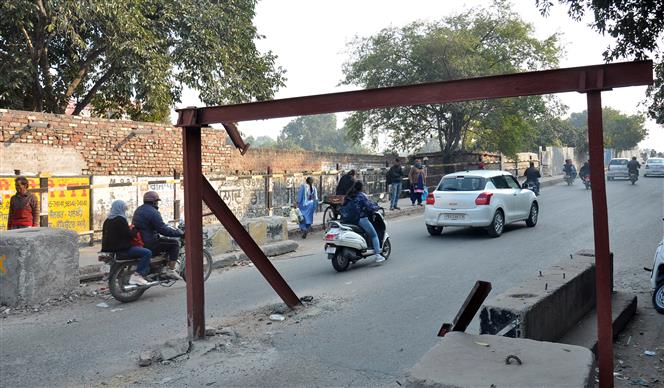 Hours after the installation of the iron bars to prevent plying of heavy vehicles on the Bhagwan Mahavir railway overbridge (ROB), popularly known as Rego Bridge, a driver got his vehicle entangled into it here on Monday. Moreover, the Rego Bridge has outlived its utility.

It prompted Local Bodies Minister Dr Inderbir Singh Nijjar to reach the spot and intervene to handle the situation. Consequently, a part of the iron bar had to be cut to clear the way.

Meanwhile, the concrete material of the upper surface of the ROB has started peeling off and pits have appeared at some places. In the last couple of years, commuters have been complaining of bumpy rides with roads dotted with pits and puddles. On the other hand, the volume of traffic has increased manifold on the ROB.

The ROB is vital for trouble-free flow of the city’s traffic. It acts as a short cut for commuters coming from Nawakot and Islamabad areas and scores of villages behind these localities to enter the city. Commuters believe that its immense utility in resolving myriad problems of traffic had never been felt by the authorities.

Traffic scenario in the city is likely to worsen with the imposition of restriction in plying of heavy vehicles on the colonial-era Rego railway overbridge, which is necessary to avoid any accident. The ROB connects the GT Road and the Gobindgarh Fort.

Considered one of the oldest bridges in the city built by the British after the annexation of Punjab, the ROB was repaired way back in 1982. Its deplorable condition caught the attention of the authorities in the past as well, but inability to develop unanimity over technical points compelled them to put the proposal on the back burner.

The process of reconstruction of the ROB had commenced over six years ago. In the year 2017, the Amritsar Improvement Trust (AIT) had received a preliminary estimate of Rs 37 crore for the slabs of the bridge, but with a rider. The Railways had sought elevation in the height of the new bridge by at least 1.5 metre as a provision for the passage of power lines. For this, the ramps would have to be stretched on both sides.

The MCA had refused to issue the no-objection certificate (NOC) to the proposed extension of the ramp towards the GT road as it would congest the GT road where a dedicated lane for the BRTS had already been established in the middle of the road.

When contacted, Dr Nijjar said he would revisit those documents pertaining to the reconstruction of the ROB to find a way out.