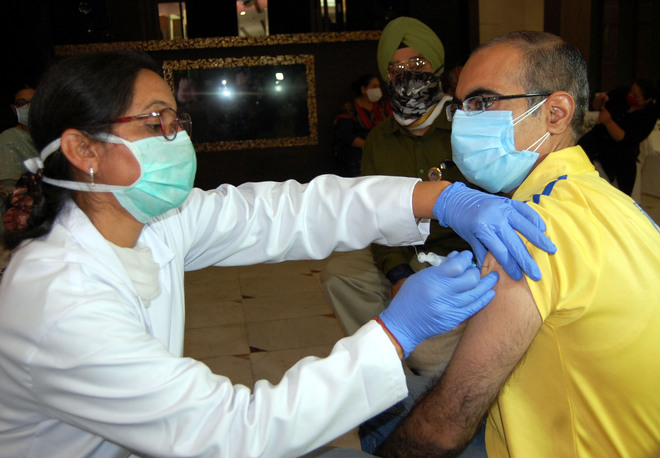 Amid the increase in number of Covid cases in the district, residents, especially traders, feel the government might announce restrictions on the movement and working hours to deal with the situation. As the fear of the lockdown is growing, residents are anxious.

The recent development in Delhi, where the state government announced a seven-day lockdown and in Rajasthan, where a 15-day lockdown has been announced, has given rise to such speculations among residents in the city.

No doubt, ever since the start of pandemic, the Covid situation at present is at its worst as the number of daily cases has seen an exponential rise. Residents said a lockdown would give rise to another set of problems.

Sukhwant Singh, a trader, said the way the number of positive cases is increasing daily, a demand for lockdown might be made by a section of society in a few days as they are worried. “It can be in the interest of the general public, but it will be devastating for the traders,” he said.

The traders expressed that if the neighbouring states such as Rajasthan have announced a lockdown, the Punjab Government, too, might follow suit in the coming days. Residents said the general public needs to be more aware of the health hazards.

“We cannot live our entire lives in lockdown. We all need to change ourselves. Still, a large number of people can be seen flouting guidelines and consider that there is no such disease,” said Bhavna Sharma, a schoolteacher.

Amritsar: The district health authorities on Monday reported 12 deaths due to Covid-19, pushing the toll to 831. Moreover, the district also reported 342 new cases taking the total to 27,365. The deceased have been identified as Narinder Singh (48) of East Gobind Nagar on Sultanwind Road, Paramjit Kaur (60) of Kale Ghannupur village, Chand Rani (70) of Vikas Nagar, Baldev Raj (50) of Pakharpura village, Sukhjit Kaur (55) of Harar village, Gurmej Singh (50) of Ajnala, Surakhsha Gupta (50) of Ram Bagh, Satnam Singh (72) of Ashok Vihar (Ram Tirath), Harjit Kaur (59) of Mehma village, Manjit Kaur (69) of Baba Bakala and Manjit Kaur (71) of Wajir Bhullar village. The new cases include 243 influenza-like illness cases and 99 contacts of positive patients. With the recovery of 300 patients, the recovery count has increased to 22,339 in the district. At present, the district has a total of 4,195 active cases. The district has reported a total of 155 deaths in the month of April so far. It is the second highest number of deaths reported in a single month. The district had reported the highest number of 203 deaths due to Covid in September last year when the first wave of the virus was at its peak. Though the number of positive cases has surpassed the peak of the previous year, the number of casualties is comparatively low. Medical experts stated that in the changed scenario, residents and medical experts are experienced and are well aware of the situation than they were last year. The shortage of oxygen cylinders has been reported from different places. Even Guru Nanak Dev Hospital has started using its buffer stock kept for emergency situations, leading to speculations on social media that the hospital has exhausted its stock of oxygen. However, the hospital authorities later clarified that buffer stock is kept for such situations so that orders for replenishing stock could be made in time. Even the Medical Education Minister clarified that there was no shortage of oxygen. TNS