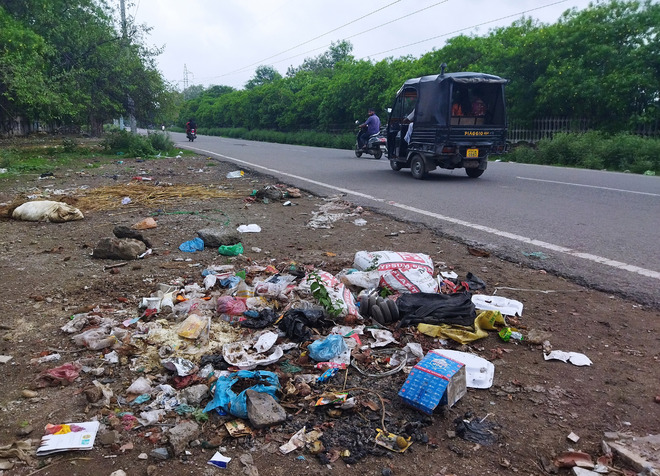 The road between Rego overbridge and railway crossing Islamabad has turned into a dump yard.

Though the MC Commissioner has initiated a sanitation drive in the city and prepared a roaster to cover all the roads within 15 days, garbage dumps still dot at places along the stretch connecting the Islamabad area and the Rego railway overbridge (RoB).

Earlier, there was a large dump on the site and after being highlighted in these columns, the dump was removed in January. However, garbage is again being dumped on the site.

Residents have been demanding the clearing of the dump as, they fear, it would again form the shape of a big mound.

The defence area, the railway station’s loading and unloading cargo facility, the railway’s residential B-block Colony and a historic gurdwara are based along the stretch.

Naveen Kumar, a resident of the area, said, “The road is used by thousands of commuters. Earlier, there was a huge dump and after a long struggle it was removed. Now, garbage is being dumped along the roadside again, turning it into an ugly sight. Being a significant road for commuters, it should be clean like other main roads.”

Garbage, debris and other refuse dot both the sides of the stretch. “It has become a breeding ground for mosquitoes. Foul smell also emanates from the area,” said Gurpreet Singh, another resident.

MC Commissioner Malwinder Singh Jaggi would conduct an inspection of these roads on July 30, the day the first phase of the cleanliness drive ends.