Safety protocols go for a toss in Amritsar 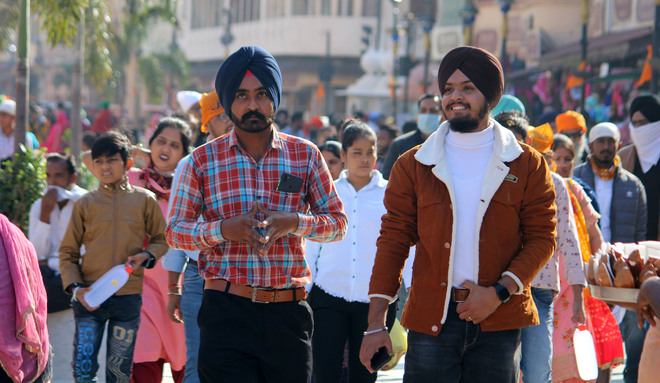 Not giving two hoots to rules Residents roam without face masks at Heritage Street in Amritsar on Friday. Vishal Kumar

Even though the administration has geared up to tackle the threat of a second wave of the Covid-19 contagion by updating its medical infrastructure, residents are giving a damn about the safety protocols.

A large number of residents can be seen roaming without masks and violating other protocols like maintaining physical or social distance. People have no fear of the law and are not following the guidelines issued by the Central and state governments.

There is a spurt in Covid-19 cases in several parts of the country which prompted the government to urge the people not to throw the government instructions to the wind. The Haryana Government has ordered the shutting down of private schools till November end while emergency steps are being taken in Delhi and Ahmedabad for tackling the situation emerged due to the rising Covid-19 cases again. The Delhi Government has even announced to hike the fine for violating the instructions to stop the spread of the deadly virus.

Dr Rakesh Sharma, a local resident, said people should follow the guidelines religiously to fight the virus otherwise the Punjab Government would be forced to take stern action against the violators and offenders like the Delhi government did.

He also directed the health authorities to review the arrangements made during the peak period of the virus like control room, Covid centres, ambulances and ICUs. They were also asked to take necessary steps to remove any shortcomings.