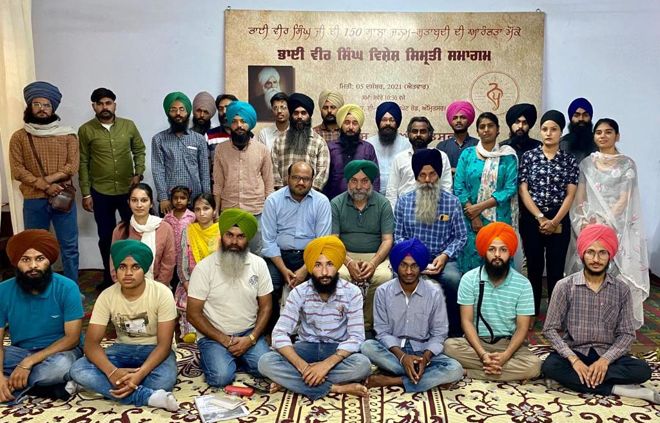 NAAD Pargas held a session on significance of mapping of Sikh studies being conducted world over in Amritsar. The Tribune photo

A talk on the framework of Sikh studies was held in a series of events being organised by Naad Pragaas. These were held on the occasion of the 150th birth centenary of Bhai Vir Singh. Prof Gurpal Singh Sandhu from Guru Nanak Department of Sikh Studies, PU, was the key speaker.

He said to ensure the framework of Sikh studies, one must first abandon the existing perspectives on Sikhism which define it in the sense of a particular historical or theological phenomenon. He said Sikhism liberates a human being from his imperfect and unfathomable individuality and sociality.

Dr Sukhwinder said: “It is important to know its problems, intellectual realm and its possible relationship with human-cultural life,” he said.

Lakhveer Singh, a researcher at JNU, Delhi, said while using the metaphor in Sikh commentary, one should keep in mind its literary and philosophical differences. Hira Singh from Jamia Millia Islamia, said incomplete social conditions should be avoided as the basis for interpreting semantics. —