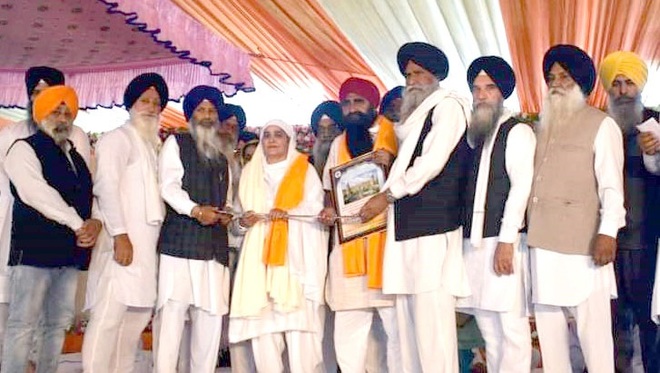 The SGPC organised a grand Gurmat Samagam (religious programme) at Habri village in Kaithal district of Haryana, dedicated to the centenary of Saka Nankana Sahib, when Gurdwara Nankana Sahib was liberated from mahants about 100 years ago.

The SGPC has been organising these programmes at different places dedicated to Saka Nankana Sahib and centenary of the establishment of SGPC, to commemorate the contribution of Sikh leaders of the Gurdwara Reform Movement.

On this occasion, many Sikh personalities including SGPC president Bibi Jagir Kaur shared their views with the congregation and the renowned raagis (gurbani kirtan singers), dhaddis (ballad singers) and kavishar (poetry) groups connected the audience with Gurbani Kirtan and the glorious history of the Sikhs. The family of jathedar Kartar Singh Jhabbar, an important leader of the Gurdwara Reform Movement, had migrated to Habri village in Kaithal district of Haryana after the partition of the country.

Speaking on the occasion, Bibi Jagir Kaur said, “The brutal atrocities perpetrated by the goons of mahant Narain Das, on the Sikhs who had come to restore the sanctity of the holy shrine Sri Nankana Sahib a hundred years ago, was a cruel truth of the times which could never be forgotten. This incident had laid the foundation of the country’s independence. Whenever there was a calamity in the country, the Sikhs rendered great services as per teachings of the gurus, yet the present government has restricted the Sikhs from visiting their pious Shrine in Nankana Sahib without bothering about their religious sentiments”.

Jathedar Jhabbar’s grandson Jograj Singh Jhabbar and prominent personalities were honoured on the occasion with siropao (robe of honour) and mementoes.