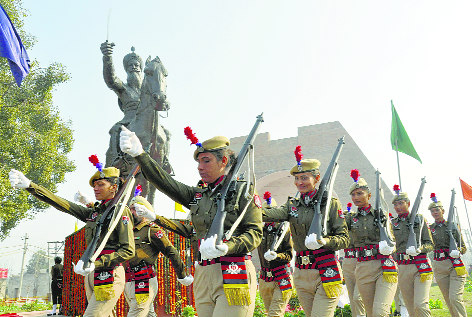 Punjab police personnel march as they pay tributes to Sikh warrior General Sham Singh Attariwala on the occasion of his 174th Martyrdom Day at the India Gate in Amritsar on Monday. Sunil kumar

Attariwala participated in many campaigns, including the Battles of Multan, Kashmir and the Frontier Province. Owing to his courage and influence over the Khalsa army, Sham Singh was nominated to the Council of Regency set up by Maharani Jind Kaur for the minor sovereign Maharaja Duleep Singh. During the first Anglo-Sikh war, he crossed the Sutlej, vowing to lay down his life rather than return in defeat. Following his death in the Battle, Attariwala was cremated at his village Attari.

The dignitaries paid floral tributes were paid to Attariwala. Speaking on the occasion, Soni said Sham Singh Attariwala sacrificed everything to resist the British invasion. He said examples of valour which Attariwala displayed in the Battle of Sabrawan are rare in the history. Later homage was paid at the burial site of the Sikh general. Descendents of Attariwala were also honoured with ‘siropas’.