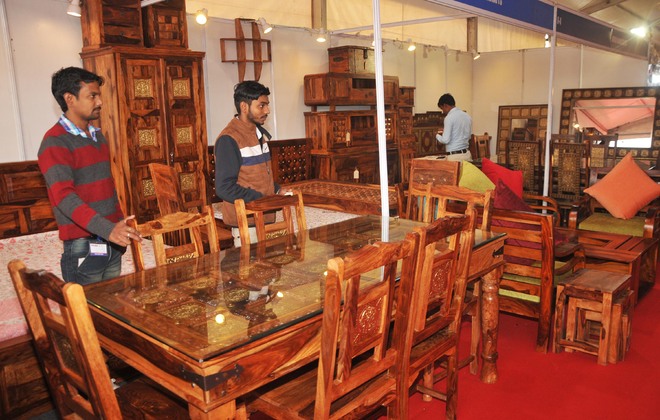 An exhibitor showcases furniture at a stall during PITEX-2019 in Amritsar on Friday. Vishal Kumar

The ongoing PITEX-2019 has become a go-to place for the shoppers with its unlimited display of consumer products and stand out stalls that promise to bring new regional and international flavours.

This year, the spotlight is on stalls from Madhya Pradesh, with rich handicrafts and handlooms, including Gond paintings and Chanderi fabrics being popular picks. In the international arcade, Thailand has the maximum participation like every year, with décor items to every day products such as accessories and dry flowers being the crowd-pullers. The Indian arcade has handicrafts and handlooms from Rajasthan, Punjab, Haryana and other states.

One of the regular participants, exhibitors from Jammu and Kashmir have made their presence felt with the traditional Kani shawls or walnut wood handicrafts, the state has brought 22 exhibitors with a team of 50 artisans to the PITEX. The reluctant participants, in the aftermath of abrogation of Article 370, were brought together by the Directorate of Handicrafts of Jammu And Kashmir. “The invitation of participation was received by us about two months ago and the valley was still struggling to come back to normalcy at the time. The phone lines were down and communication totally shut down. So, it was really difficult for us to reach out to weavers and artisans, who otherwise were a regular part of the five-day PITEX. We had to travel door-to-door, convincing them to be a part of the annual trade expo to continue their livelihood, as most were not sure of travelling under the given circumstances,” said Zahoor Ahmed, technical assistant of the Directorate of Handicrafts.

Ahmed said it was also important that the artists let go off their comprehensions, as the handicraft industry had been struggling to revive after the unrest in the Valley. “It has been difficult for local artisans to get back to work but the things are returning to normalcy slowly.” Meanwhile, popularity of products from the Valley remains unhinged.