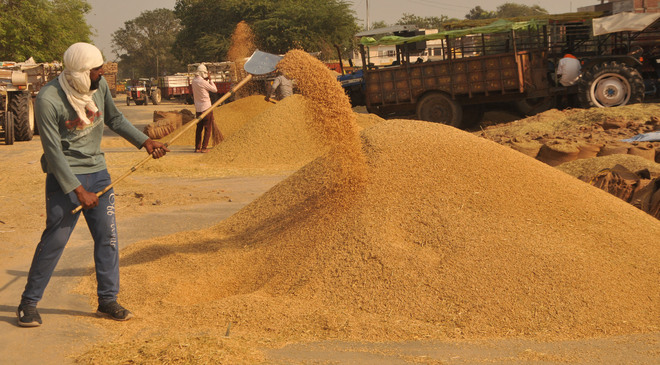 The recent change in weather conditions and meteorology forecast predicting showers have hastened the paddy harvesting process in agricultural fields as farmers are eager to sell the crop to avoid any damage to it due to the rains.

The area had witnessed mild showers on Sunday night and the weather remained partially cloudy during the past two days, which have added to the fear of the agrarian community. Though the paddy crop is fully ripened, farmers are delaying the harvesting so that the moisture content in grains drops to optimal level.

Meanwhile, officials of the mandi board said a total of 2,25,728 metric tonnes of paddy crop had already arrived in markets so far during the current season. Of the total arrival, a total of 2,17,680 metric tonnes of produce had already been procured by different government procurement agencies. District officials expect a total arrival of around 5 lakh MT of paddy this season.

The officials said 18,975 MT of crop arrived in the markets on Tuesday. The procured produce was being swiftly lifted for grain markets to make space for the arrival of more produce.

The officials said basmati varieties were being purchased at a cost of Rs 2,500 to Rs 3,000 per quintal. The prices for the basmati grains are higher this year as compared to the previous year as due to low prices last year, most of the farmers had preferred not to cultivate these varieties this season.

The agriculture officials said the harvesting would further pick up pace in the coming days. Meanwhile, the farmers had already initiated sowing of vegetable crops, especially peas and potato.