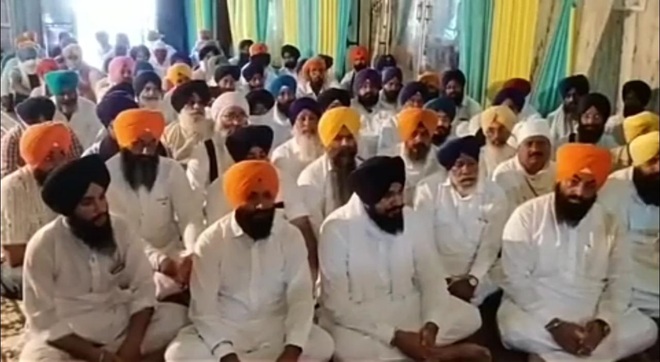 Devotees without masks during the marriage anniversary celebrations of Guru Nanak Dev in Batala. Tribune photo

Despite the district administration order to cancel celebrations of the marriage anniversary of Guru Nanak Dev, also called 'Babe da viah', thousands of devotees spilled onto the streets in Batala. The cops had a hard time ensuring that the social distancing norm was followed. Police personnel were deployed in large numbers around the historic Kandh Sahib Gurdwara, the venue of the festivities. Shopkeepers could be seen lamenting loss of their business. During the normal times, over 400 such shopkeepers, who put up temporary stalls, make a bounty. However, this year due to the pandemic, the traders could not set up stalls. Many of them made a living by selling vegetables in the labyrinthine lanes of the old city.

Kavita Khanna, the wife of former MP and film star Vinod Khanna, has set the cat among the pigeons by sending feelers that she might be the BJP candidate from Pathankot in the 2022 Assembly polls. Kavita, who is a graduate from the London School of Economics, has surely ruffled many a political feathers. State BJP president and former MLA Ashwani Sharma, who has become active in local politics, will be keenly watching Kavita's next move. He lost the 2017 polls to Congressman and former Reliance executive Amit Vij, but that has not deterred him from trying his luck again. Former Mayor Anil Vasudeva is also in the fray. Kavita, who had sought tickets in the 2017 and 2019 elections, is considered close to influential party leaders in New Delhi. When Vinod Khanna was appointed Minister of State for External Affairs in 2002 by the then Prime Minister Atal Bihari Vajpayee, it was Kavita who managed his affairs. These days, sitting in her Mumbai house, she takes an active interest in the political goings-on in the area. And this is what is making her in-house party opponents edgy. A wag commented that prospective ticket seekers are now acting like cats on a hot tin roof.

Cabinet Minister Sukhjinder Singh Randhawa, who represents Dera Baba Nanak in the state Assembly, may have been bitten by the Covid bug but the man has not lost his sense of humour. The other day his statement that “my political opponents can breathe easy because rats and snakes are immune to the virus” had even his detractors in splits. These days he is recuperating at his official residence in Chandigarh. The video conferencing technology has come in handy as he regularly holds virtual meetings with officials to ensure that developmental works do not suffer in his Assembly constituency. The virus, nevertheless, has made him a bit philosophical. “The pandemic has reminded me of how life was before vaccination. The world is on its way back to the 1800s when people were afraid of germs and viruses. Covid has left us like newborn people. After the dust is settled, none of us will ever be the same again. We will have deeper roots and we will have seen many more things,” he said.

The Kartarpur corridor wears a desolate look these days. The thoroughfare, which is a 4.5-km-long road to the shrine located across the border, has been closed by the Union Government due to Covid. However, last week, some activity was witnessed when social worker and environmentalist Baba Sewa Singh, accompanied by officials of the National Highways Authority of India, planted scores of saplings near the corridor. He also heads the Kar Sewa sect, Khadoor Sahib, and has offered Sri Guru Angad Dev College, run by his sect, to the administration for quarantining Covid patients. One thing is sure: The survival of everyone depends on the health of the environment. “A nation that destroys its soil destroys itself. Forests are the lungs of our land for they purify the air and give strength to the people,” remarked an official accompanying the Baba.