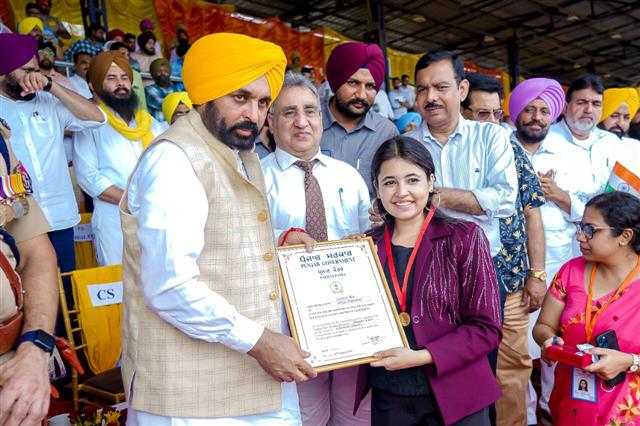 The young singing sensation from the holy city, Hargun Kaur, was felicitated by CM Bhagwant Mann on the Independence Day. She received a gold medal, a shawl and a commemorative certificate from the CM during the state-level Independence Day function held in Ludhiana.

She has achieved success at various state and national-level signing shows, besides performing in live shows across the country and abroad. Hargun has also participated in the “Voice of Punjab” and “India’s Got Talent” reality shows.

Besides, she is already working as a playback singer for the Marathi film industry. She won Sangeet Samrat on Zee Yuva and was one of the finalists in “India’s Got Talent” on Colors, “The Voice” on Star Plus and “Voice of Punjab”. She was a playback singer in movie ‘Triple Seat’ and won Shree Baba Harivallabh Sangeet Sammellan twice.

A versatile singer, she is adept at singing various genres like folk, Bollywood, Sufi and devotional songs, ghazals and western. She has also proved her mettle in other departments of singing like keytar. Besides, she is a good harmonium player.