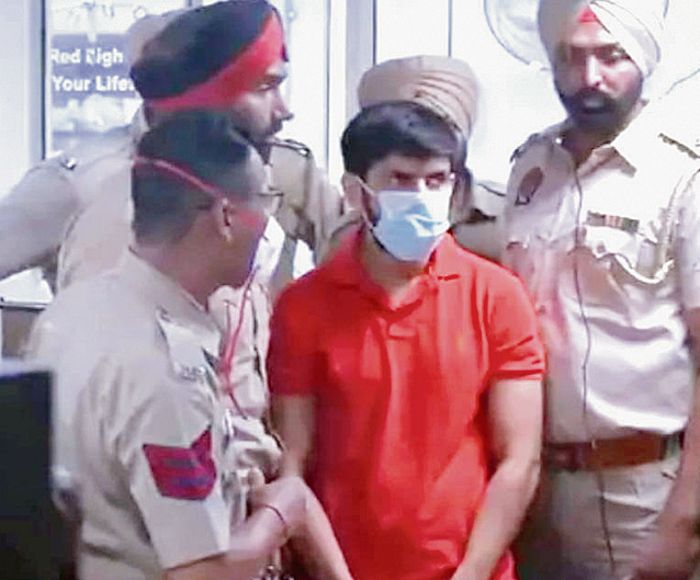 Gangster Lawrence Bishnoi being produced in a court. File photo

The city police have constituted a Special Investigation Team (SIT) to interrogate gangster Lawrence Bishnoi, prime suspect in the Sidhu Mossewala murder case, during his eight-day police remand to the Amritsar police.

Bishnoi was produced in the local court yesterday, where the police got his remand to interrogate him in the Rana Kandowalia murder case. However, following security reasons he was transferred to Kharar.

The Assistant Public Prosecutor argued that on January 14, 2022, gangster Monu Dagar had given a statement to the investigating agency that in 2017, he met Lawrence Bishnoi when he was lodged in Ambala Jail and after being released from the jail, he started working for Bishnoi group.

In 2021, his friend Deepak, alias Deepu, a resident of Jhajar, Haryana, had a telephonic conversation with Lawrence Bishnoi, who was lodged at Tihar Jail, New Delhi, upon which, the accused Lawrence Bishnoi asked them to do some work of Jaggu Bhagwanpuria.

On the other hand, the counsel for accused Amandeep Singh Pahwa Advocate has argued that there is no documentary proof of meeting of accused Bishnoi with Dagar at Ambala Jail as the accused has been lodged in Tihar Jail, New Delhi, and Rajasthan Jail for the past over nine years.