Was caught red-handed while accepting Rs4K from a fellow doctor 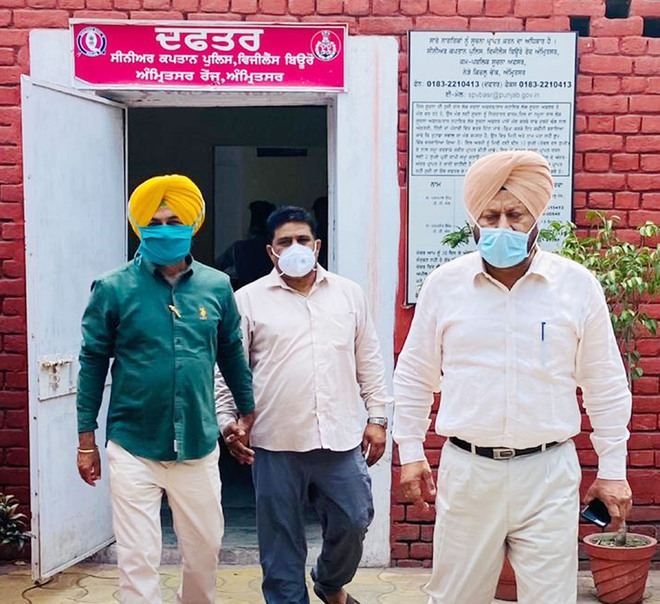 The accused SMO being escorted by the police personnel in Amritsar on Friday. Tribune Photo

The Vigilance Bureau alleged that the accused had demanded a monthly bribe of Rs 4,000 from community health officers working in Primary Health Centres threatening that he would make their adverse report which could lead to the termination of their services. He was booked following a complaint by Dr Gurbakshish Singh, Community Health Officer at Health and Wellness Centre in Abdal village. He was working there under the National Rural Health Mission (NRHM).

Considered close to a local MLA and senior Congress leader, Chohan earlier remained posted as health officer in the Municipal Corporation Amritsar and as district epidemiologist at the Civil Surgeon’s office here. He was recently promoted to the rank of SMO and this was his first posting.

In his complaint, Dr Gurbakshish Singh said Dr Chohan had convened a meeting on April wherein he had threatened all CHOs working under him that their annual audit was forthcoming and it was in his hands to terminate or save their jobs and whether to pay them an incentive of Rs 15,000 or not.

He said Dr Raju threatened them that if they wanted to continue with their jobs and get Rs 15,000 per month, they would have to pay him a monthly bribe of Rs 4,000 otherwise he would make their lives hell. If anyone dared open his mouth, he would be terminated. Thereafter Dr Raju Chohan stopped the incentive of Rs 15,000 for the month of March of all CHOs working under him, which has not been released till date.

He said when the accused demanded Rs 4,000 from him, he lodged a complaint with the Vigilance Bureau.

Parampal Singh, SSP, Vigilance, said Dr Chohan was caught red-handed while accepting a bribe of Rs 4,000 from the complainant by the investigating officer in the presence of the official independent witnesses on Friday. Subsequently, a case under the Prevention of Corruption Act was registered against him.