...some try to hoodwink district administration 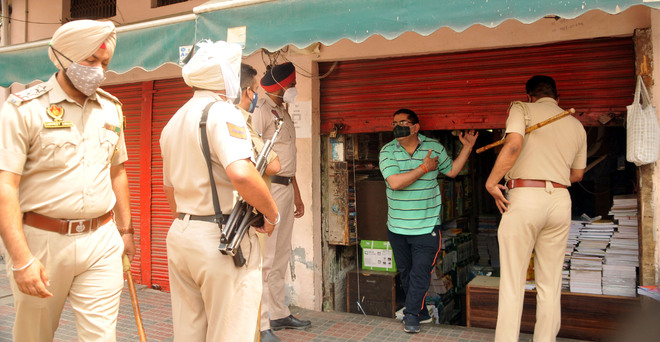 With new restrictions imposed by the state government to break the chain and tackle the pandemic, the police today warned people not to venture out without genuine reasons.

Cops appealed to residents ‘stay home and stay safe’ as the Covid-19 cases and death toll has jumped manifold.

The police personnel remained on their toes to implement new guidelines under which only shops selling essential services, including chemists and grocery stores, were allowed to open.

Many shopkeepers tried to open their establishments by adding essential items in their shops. They were warned by the police officials not to resort to such tactics to befool the administration.

Amritsar Deputy Commissioner of Police Parminder Singh Bhandal said, “Several mobile showroom owners set up tables in their complexes and tried to argue that they were also in business of mobile repair. We sternly told the market association not to indulge in such tactics.”

He said special nakas were already in place and the police officials were asked to remain on the roads and work in close association with their subordinates to ensure strict implementation of the new guidelines.

Bhandal visited different nakas and bazaars and also met with shopkeepers. He said on Sunday, our officials met with chiefs of different market associations and informed them about the new restrictions issued by the state government and sought their cooperation.

Amritsar (rural) SSP Dhruv Dahiya said there were clear instructions to impose ‘mini lockdown’ and cops were asked to implement the same in letter and spirit.