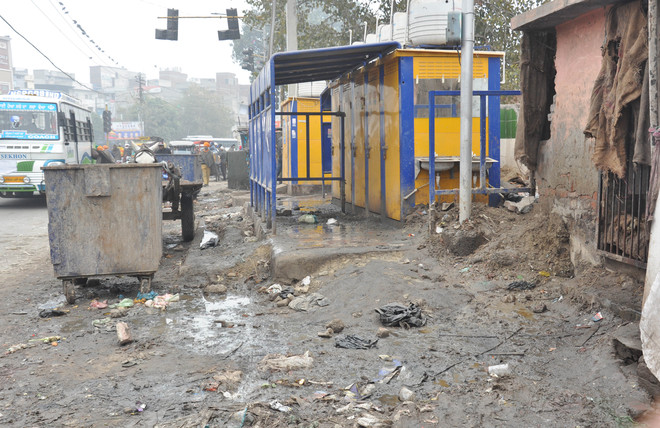 A set of four toilets raised at the Moran Wala Chowk in Ram Bagh area has been lying locked since it was constructed nearly two years ago prompting people to continue urinate outside, thus causing the surroundings to stink.

These toilets are located on the prime commercial location with a road across leading to the Shahid Madan Lal Dhingra Inter-State Bus Terminal (ISBT).

Gurpreet Singh, running a butcher shop, says locked toilet set being used meant that there is no provision of cleaning and water. “This made entire surroundings unhygienic and was casting a negative impact on the footfall of customers,” he adds. Earlier, the Covid-19-induced lockdown and later precautions had brought down the income to zero. Now, unclean surroundings are nudging the prick.

Babloo is another shopkeeper who earns his livelihood nearby. He said the patch is so prime and bustling with commercial activity that the flow of traffic barely stops at midnight. The traffic is to be revived early in the morning as people with luggage and their belongings head towards the ISBT. He asserted that the sewerage lines of the stretch needs to be replaced as it used to clog immediately after opening of tap in the toilets. Before the construction of new toilet utility an open toilet set used to exist there.

When contacted, councillor of the area Rajbir Kaur, said the process of handing over the toilet set to a new contractor was underway. “Once it is over the washrooms would be opened for public,” she said.