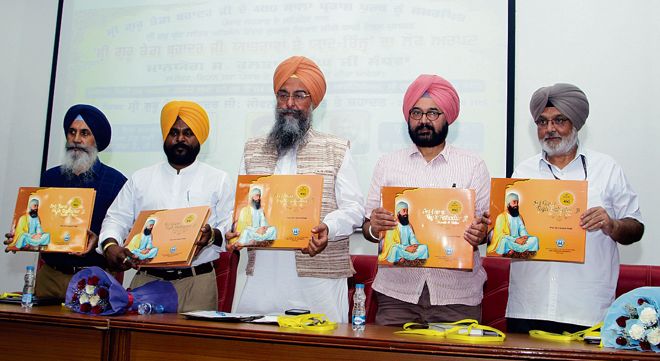 He said, “It is a matter of pride for us that GNDU is working on the footprints set by Guru Nanak Dev by continuing with the tradition of documentation of wisdom thoughts and important events of history.”

Prof Amarjit Singh said the book comprises many important historical events and other relics that are presented for the first time and in detail.

Manmohan Singh was a Punjabi scholar who had translated Sri Guru Granth Sahib in English and is the grandfather of VC Prof Jaspal Singh Sandhu.

Speaker Kultar Singh Sandhwan announced a grant of Rs five lakh to GNDU and assured VC Prof Jaspal Singh Sandhu that he would take up the matter of grants to the university with CM Bhagwant Mann. “GNDU has been upgrading its academic and research infrastructure to higher levels. I will ask the CM to open heartedly provide all support to it,” he said.

The Student Action Committee submitted memorandum of demands to the Speaker as he met them and listened to their issues. They raised the issue of lack of democratic space to students. From discussing the demand of raising funds for the varsity from the state government and allowing students to take exams in Punjabi, they also sought a high-level inquiry into unconstitutional appointments in university.