In trade for over two decades, claim residents; made property worth lakhs 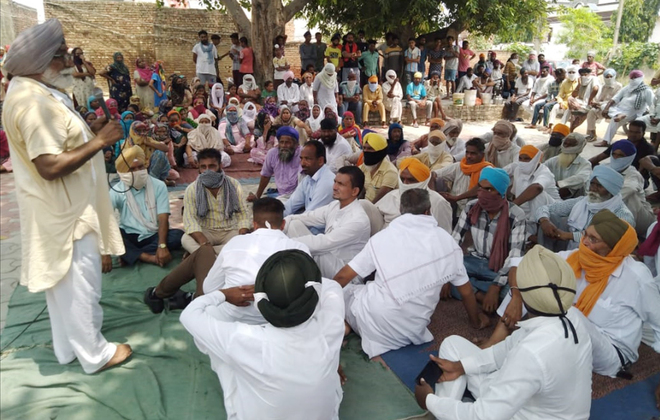 Villagers hold a protest at Muchhal village in Amritsar on Friday. Tribune photo

The Amritsar rural police have nabbed Balwinder Kaur, prime suspect in the spurious liquor tragedy, which claimed 11 lives in the past two days at Muchhal and its adjoining villages here. Residents said she had been in this trade for the past over two decades. Her husband Jaswant Singh also died in the yesterday’s tragedy.

Balwinder Kaur was booked under Section 304 of the IPC, besides the Excise Act. She is known as Pattian Wali and has three children. Locals claimed her entire family was into this illegal trade.

They alleged that she was a regular supplier in the area and this fact was in the knowledge of the police. According to information, she used to supply industrial alcohol (spirit) mixed with water.

Yesterday, the liquor was allegedly sold by her daughter as she was not at home. Residents claimed they had informed the police a number of times, but to no avail. “She used to claim that she gave huge amounts to the police every month for continuing her business,” a resident said.

The family made property worth lakhs through the illegal business. They recently bought a plot in the village, the residents said. They alleged the accused used to run the bootlegging business from an old building owned by them near the village pond.

Gurjant Singh, president, Shaheed Bhagat Singh Naujwan Sabha, claimed drug peddling and bootlegging was rampant in the village while the police looked the other way. “Some other families are also into this illegal trade. After the tragedy, they all fled after locking their houses,” he added.

Chandigarh: SAD on Friday rejected the Divisional Commissioner-level inquiry ordered into the multiple spurious liquor tragedies in Amritsar, Batala and Tarn Taran by CM Capt Amarinder Singh and demanded a judicial probe by a sitting judge of the High Court. SAD spokesman Daljit Singh Cheema said the Divisional Commissioner-level inquiry was too little, too late. He said preliminary reports indicated that supply of spurious liquor was widespread and required a thorough probe by an independent agency. TNS

Amritsar: AAP MLA and Leader of Opposition (LoP) Harpal Singh Cheema blamed the CM for “giving a free run to liquor mafia in the state”. He visited the aggrieved families at Muchhal and Tangra villages and offered condolences. He demanded a judicial probe by a High Court sitting judge. He demanded that the government should expedite the process of bringing the culprits to justice. TNS

Chandigarh: Expressing shock and grief over deaths due to consumption of spurious liquor, Punjab Pradesh Congress Committee president Sunil Jakhar has urged the Chief Minister to get the probe completed at the earliest and take stern action against the guilty. He expressed sympathy with the affected families and said the government would not spare those involved in the crime. These anti-social elements should be punished as per law by cracking down on liquor smugglers across the state and those making spurious liquor. TNS