Construction of flyovers on bypass road leads to jams in Amritsar : The Tribune India

Construction of flyovers on bypass road leads to jams in Amritsar 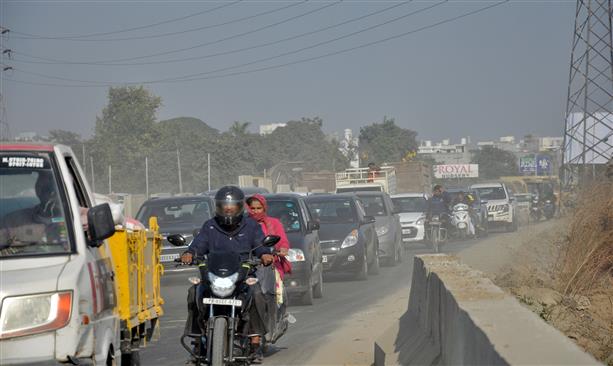 Vehicles stuck in a traffic jam on a road in Amritsar. Sunil Kumar

Huge traffic jams are witnessed in the city following construction of new overbridges on bypass roads. In absence of proper alternate passages, commuters have to face a lot of problems.

Construction firms hired by the National Highways Authority of India (NHAI) often fail to keep a check on the traffic movement while the construction work is on.

The National Highway Authority of India (NHAI) has been constructing two flyovers on the bypass road at Vallah bypass and Ranjit Avenue bypass for the ease of commuters on NH-1. The authority has diverted the traffic to side lanes, where commuters are facing inconvenience.

Due to inappropriate diversions, the residents have been facing inconvenience at Ranjit Avneue and Vallah Bypass Chowk. During peak hours of morning and evening, commuters complaint about the traffic jams.

Navdeep Saini, a resident of Vallah, said: “The construction of flyover is required to address the problem of traffic congestion on the Vallha Bypass Chowk. But the construction company should give proper diversions so that commuters don’t face inconvenience. Traffic police should also be deployed to tackle the problem.”

Residents said the NHAI should have planned these flyovers years back when they constructed other flyovers on bypass.

Jassa Singh, another resident, said: “The NHAI should ensure that the projects complete within the target time. The construction companies and NHAI should be vigilant about the probable accidents in upcoming foggy weather and adopt precautionary measures. The diversions and side lanes should be recarpeted so that commuters don’t face any inconvenience. Sign boards should also be installed to alert the commuters.”