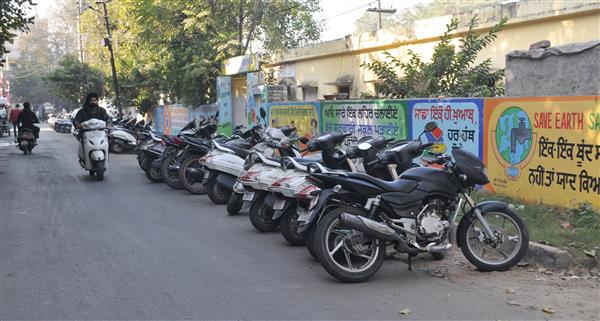 Commercial vehicles parked on the inner circular road along the historic wall in Amritsar on Wednesday. Photo: Vishal Kumar

The inner circular road along the historic wall is perhaps the widest road inside the walled city yet it has not attracted the attention of the authorities to put it into viable use to de-congest the adjoining roads.

An orbital road stretching for around 7 km finds rampant and blatant encroachments by shopkeepers, illegal extensions of houses and plying of a large number of carts. The majority of the road between the Hall gate and the Hathi gate is being used by commercial establishments for parking their own and customers’ vehicles and in the past decade several shops had been opened.

From the Hathi gate to the Lohgarh gate, several houses have constructed toilets on the road which reduces the width of the road. The road between Lohgarh gate to BK Dutt gate is marked with encroachments by automobile shops repairing two-wheelers on both sides. Between the BK Dutt gate to the Khazana gate, a tiny lane is left for the commuters to drive on. From the Hakima gate to Bhagtanwala and on to Sultanwind, Maha Singh gate, then Ram Bagh gate up to Hall gate, the entire stretch is highly commercial.

Rampant encroachments by vegetable vendors, iron-based businesses and other commercial vocations have almost gobbled up the road.

Experts are of the view that the orbital stretch would be helpful in de-congesting the circular road around the historic wall. Traffic congestion would ease as small vehicles could be diverted on to the inner circular road. Besides, it would also help tourists in reaching their destinations without grappling with traffic chaos.

Sources in the Municipal Corporation stated that plans to put the orbital road in use to de-congest that part of the city was discussed several times. However, lack of political will to convince the residents and mobilise their opinion was never achieved.