Stretch of problems: Poor management to blame for jams from Amritsar Railway Station Road to Bhandari Bridge : The Tribune India 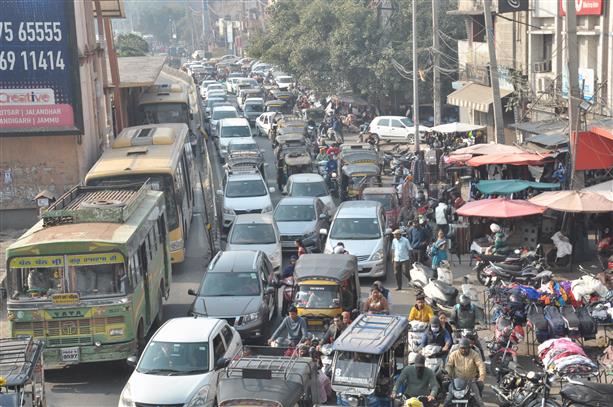 Commuters stuck in a long traffic jam near the railway station in Amritsar on Saturday. Photo: Sunil Kumar

Residents of the city are of the view that encroachments are one of the major reasons for long traffic jams. Besides, there are several spots where traffic mismanagement leads to snarls. In the absence of proper traffic arrangements, commuters face long traffic jams on the Railway Station-Bhandari Bridge stretch via Crystal Chowk.

There are some temporary encroachments opposite Alexandra School and near Crystal Chowk, but the haphazardly parking of vehicles and violation of traffic rules are among the main causes of congestion on this particular stretch.

Advocate Kuljit Singh, who often raises concern over traffic issues, said, “The traffic lights are lying defunct at Queen’s Road Chowk. It creates mess at the chowk. The traffic police allow commuters to drive wrong side on the Bhandri Bridge. If they allow traffic from wrong side then there should be a divider on the road. Secondly, there are four lanes on the bridge. The traffic police are not utilizing the new bridge properly leading to a chaos on the top of the bridge. Residents also do not follow the traffic rules. The police should deal with them strictly.

The haphazardly parking of vehicles on the railway link road, Queen’s road and Crystal Chowk also add to woes. Most of the showrooms and some prominent hotels do not have their separate parking space. There is no parking lot nearby and most visitors park their vehicles by the roadside. The Municipal Corporation does not have any check on the parking space of commercial establishments. Moreover, the traffic police are also unable to tow away any car from the road in the absence of towing away vehicles.

“There was political intervention to allow traffic on the Bhandari Bridge through wrong side. After the construction of a new bridge, there are no traffic congestions on the bridge. The traffic system needed to be streamlined. The police are now actively making efforts to clear bottlenecks,” said a traffic cop on duty.