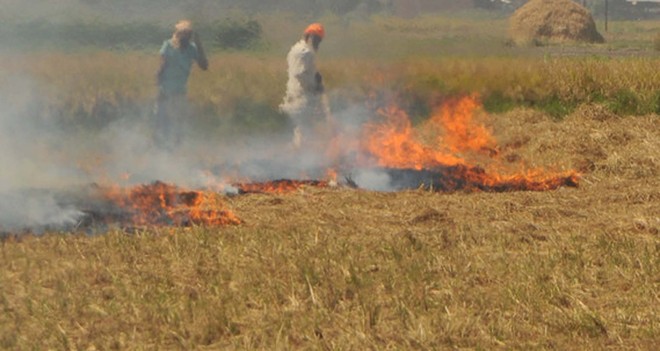 A farmer burns paddy stubble on the outskirts of Amritsar. The lack of implementation of rules related to burning of stubble is quite visible as farmers are flouting the ban with impunity.

While the government had made tall claims to check burning of crop residue in the fields and warned of strict punishment against the violators, the proposed action is invisible on ground even as farm fires are occurring as usual.

The lack of implementation of rules related to burning of stubble is quite visible as the farmers are flouting the ban with impunity. While nearly half of the area under paddy crop has already been harvested, the administration is yet to take action against even a single farmer.

This indifferent attitude towards the farm fires would further embolden other farmers who too would resort to burning of residue when they see no action against the ones who had burnt residue before them.

The administration is yet to take action against any violator even as there is no visible change in the scenario as compared to previous years. The burning of crop residue, apart from causing environmental pollution and degrading soil health, is also a cause of inconvenience for the commuters as smoke hinders visibility resulting in chances of road accidents.

A resident Shamsher Singh said: “The burning of crop residue in fields close to roads results in creating a smoke screen on the road as a result of which drivers cannot see the vehicles coming from the opposite side.” In the previous years, many accidents, especially involving two-wheelers, were reported due to low visibility caused by smoke.

Additionally, these fires also result in damaging the saplings and trees planted alongside the roads in rural areas. Many large trees can be spotted burnt at their base in rural areas.

Smoke trouble for commuters in area