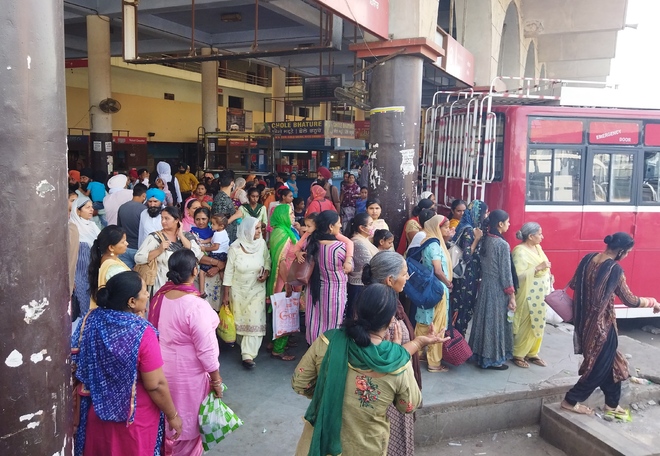 Women passengers wait for their buses at the ISBT in Amritsar on Sunday. Photo: Sunil Kumar

Even as very few trains and buses are being plied locally due to the fresh surge in daily infections amid the second wave of the pandemic, the occupancy rate in both forms of transport is extremely high, throwing all Covid-19 norms to the wind.

A visit to the Shahid Madan Lal Dhingra ISBT laid bare the shocking fact of jam-packed buses being plied and extremely high passenger footfall at the terminal.

Since free of cost travel was offered to women by the government, an upsurge in the number of women passengers has been recorded. Despite strict warnings, passengers are not heeding to the directions to comply with the Covid-19 norms. Instead, they were complaining against local officials for not operating all buses.

Sources at the ISBT said 600 buses, including all 250 state-owned buses, are plying daily from the ISBT. They said passengers en masse have shifted to government-run buses, depriving private-run buses an opportunity to earn. As a result, a large number of private players have exited the profession. So, the total number of buses being plied from the ISBT, which used to be 1,500 daily before the lockdown, has come down to about 600 .

Caring two hoots for the surge in Covid cases, most of the passengers were seen without masks. They did not even bother to maintain social distancing and were freely mingling with each other. Not only this, as soon as the buses for their destinations arrived, there was a competition to board first. Notably, most of the passengers were women and a large number of them were with their kids.

Suman, a passenger, said she was going to travel to the Dinanagar area of Gurdaspur, where her parents reside. Accompanying her two kids, she said she would naturally avail the free travel facility as the scheme was recently introduced by the government. She said she normally visits her parents after two to three months. Otherwise, she praised the move of the government, adding that it was for the first time that a scheme for all sections of women was offered.

Swaranjit Kaur, another passenger, said she was travelling to meet the family of her brother at Dera Baba Nanak. “A housewife neither has time nor enough money to spend on herself and free travel in buses offered her an opportunity to revive links with distant relatives.”

Similarly, there is no visible hustle and bustle at the railway station platforms as the Government Railway Police (GRP) personnel, Railway Protection Force (RPF) and railway authorities are strictly enforcing the lockdown norms by not allowing any person without a ticket and valid reason. However, adhering to Covid-19 norms inside the train is almost impossible. Reason: Cent percent occupancy in 12 pairs of trains being plied from the local railway station on a daily average. Before the lockdown, 65 pairs of trains used to operate on an average.