Tangled Mess: Cobweb of wires a threat to Amritsar residents : The Tribune India 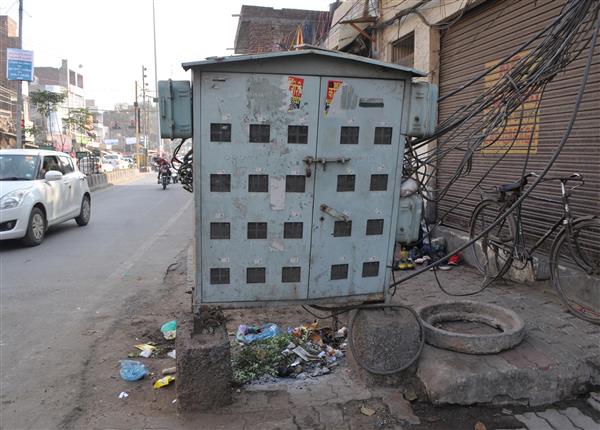 A pillar box installed in the middle of the footpath. Photo: Vishal Kumar

A maze of wires (be it cable TV wires, electric cables, telephone and Internet company wires), improperly installed pillar boxes and transformers on the 7.4-km-long circular road around the walled city not only pose a danger to residents, but also look ugly.

A mesh of wires covers the facade of the remains of the historic wall. There are 12 gates around the walled city. Out of these, only seven survived. Heritage structures inside the walled city were paid heed to and conserved by the government, but outside the wall they were hardly paid attention by the government. A majority of the tourists head towards the Golden Temple from the Hall Gate and come out of the Sikandari gate, both being one-way roads.

Kulwant Singh Ankhi, a retired principal, said dangerously dangling low wires on the Circular Road should be removed. A bunch of them could either be put into a duct or underground. He recalled that in 2020 the then Congress government had inaugurated a project to develop the road as a smart road under the Smart City Mission. The project cost was pegged at Rs 125 crore and the work would be completed in 28 months.

The ever-increasing traffic, a high number of floating population and poor management of infrastructure are leading to frequent traffic jams. A major portion of the footpaths is encroached at several places by pillar boxes because they have been installed in a manner that they block the movement of pedestrians.