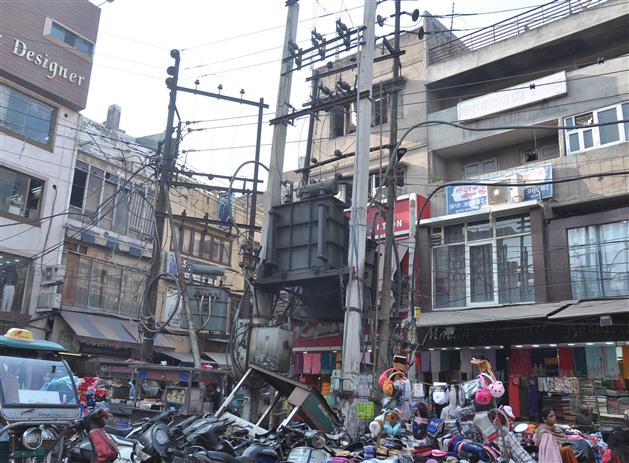 Cobwebs of wires in the Katra Jaimal Singh area in Amritsar on Wednesday. Photo: Sunil Kumar

Traditional commercial areas in the walled city have been marred by cobwebs of all kinds of wires while the authorities look the other way. Loose cables of different departments like the PSPCL, cellular companies, poles and pillar boxes are galore in these areas.

Set up centuries ago, these markets are situated in congested lanes. However, the floating population and transportation of commodities in rickshaws, autos and cart make it more congested. Several fire breakouts occurred in the past and short circuit was held as reason for most of these.

Notably, a majority of these markets are situated in the vicinity of the Golden Temple. So tourists happen to visit a good number of these localities for shopping. Removal of these wires by putting them underground or ducting them into a hollow pipe could improve the look of these markets. In turn it would beautify the markets which would increase the footfall of tourists and other visitors for shopping.