Prerna earns a niche in the field of educating special children 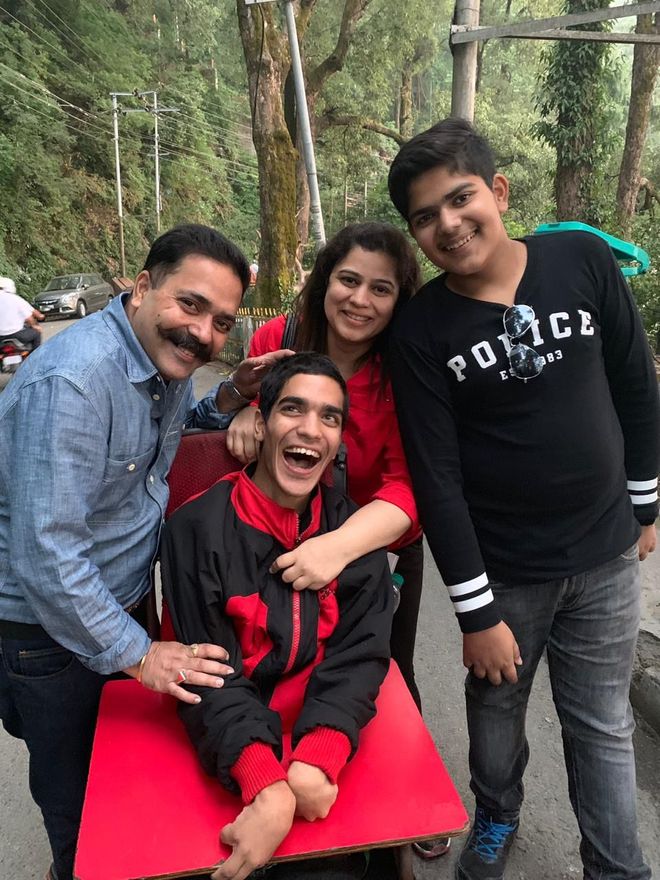 Special educator Prerna Khanna with her family in Amritsar.

What started as a saga of an individual to take care of her son with special needs turned into a movement for setting up an NGO and a school for such children.

Nearly two decades ago, Prerna Khanna had gone to the national capital to provide treatment to her two-year-old ward and charted out an altogether new career in her life. A commerce graduate with diploma in software programming, she did her BEd from the Indian Final Injuries Center, Delhi, in 2008.

Now, she is a reputed teacher for students with special needs and teaches and guides special students from Amritsar and neighbouring districts. Acknowledging her accomplishments, Khalsa College is all set to felicitate her with Punjab Teachers Award 2020 on the campus on September 7. Her struggle to find a space for her son in mainstream schools led to opening of a window of opportunity for the students with special needs. Her initial struggle to provide proper treatment to her son in Delhi led her family to opening of a centre in the holy city.

Way back in 2001, Prerna and her husband Gaurav had got to know about their one-year-old child that he was suffering from cerebral palsy. Next year (2002), she along with her two-year-old son shifted to Delhi to provide her son the best available treatment. She had taken a house on rent and stayed there for two years. During the stay, her son was given occupational and speech therapies, besides hyperbaric oxygen and special education at a rehabilitation centre. When the elder one was four years old she was blessed with another son.

Recollecting those days, she said that was an extremely tough phase of life. During her stay over there, she had a chance to listen to a lecture by an expert who had insisted on parents, especially mothers, to learn special education to take care of their wards with special needs which had prompted her to do BEd.

“As I had to stay with my son for eight to nine hours at the rehabilitation centre every day during my stay in Delhi, my father-in-law Arun Khanna shared an idea to open a centre at their old abandoned house,” she said. The idea worked and they set up an NGO – Global Institute For Childhood Disability — where she had first started voluntarily teaching as a special educator. Soon the centre was brimming with students with special needs who thronged it not only from Amritsar but also from neighbouring districts.

As time passed, her younger son Rehann started going to Spring Dales School. Anecdotes of his school prompted her younger son to press for his admission in the same school. Then she approached different mainstream schools to get him admitted. However, the truth dawned that no school has any arrangement for imparting education to students with special needs. She then approached the district administration with the same request. Then Deputy Commissioner Rajat Aggarwal convened a meeting of the city’s private schools.

Of them, Spring Dale offered to open the centre provided they got the special educators. At that point of time, she came forward and continues to teach at the same school. Now her 21-year-old son studies in Class X.

A memo soaked in teachers’ blood

Amritsar: Members of the B Ed Berozgar Sanjha Morcha, Punjab, and B Ed, TET-Pass Union carried out a protest march by holding placards and raising slogans against the government. Unemployed teachers hailing from Amritsar, Pathankot, Tarn Taran and Gurdaspur handed over a bottle of their blood and memorandum to MP Gurjit Singh Aujla here on Sunday. They want that B Ed and TET-qualified people be recruited in government schools on a priority. Aujla assured them that he would take up their demands with Chief Minister Capt Amarinder Singh. Jagroop Singh, member of the B Ed, TET-Pass Union, said the Arvind Kejriwal government in Delhi initiated drive to recruit 842 Punjabi teachers. On the other hand, the Punjab Government recruited only 62 teachers of Punjabi this year. TNS