Competitions slated, practice sessions at full throttle...players are on the go 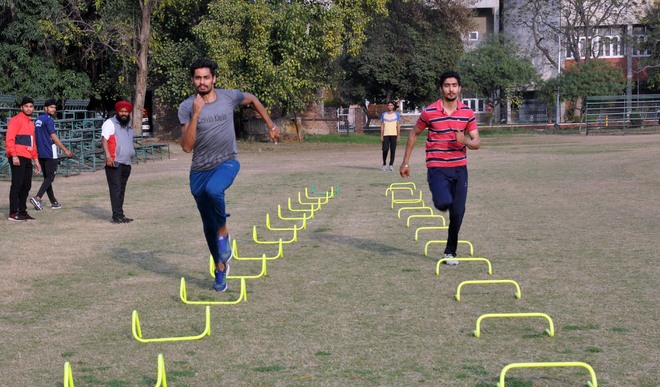 Students during a practice session at Guru Nanak Dev University in Amritsar on Friday. Sunil kumar

To make up for the loss of practice and competitive sporting events during the pandemic-hit last year, players from all sports disciplines have started preparing themselves for the upcoming events.

The entire sports calendar had been wiped off last year.

The next sports calendar for 2021-22 is set to begin on April 1 wherein all competitive sporting events like inter-district, inter-college, inter-university and pan-India will take place. The educational institutions are anticipating a big rise in sports quota admissions this year as many did not enroll themselves in games last year.

The next important competition lined up is Inter-District Athletics Championships at Punjabi University, Patiala, from February 28 to March 1. On the basis of performance in this event, state teams will be selected to take part in the national tournaments.

However, the Federation Cup is the most important of all as it will decide the fate of players who will represent the country in the Olympics. Tokyo is to host the Games on July 23.

Rankirat Singh Sandhu, athletics coach at the Khalsa Educational Institutes, says, “Barring school-going players, whose final examinations are scheduled for March, rest have hit the ground running.” Two sessions of three-hour training in the morning and in evening are carried out. He has got 100 players from different disciplines like athletes, javelin throwers, shot putters, discus throwers, including Harnoor Singh Sandhu, who clinched silver in the discus throw event at the Junior Nationals held in Guwahati earlier this month, and so on under his wings.

While many games have resumed, swimming is the odd one out as it is still reeling. Vinod Sangwan, a swimming coach, observes, “Since we do not have an indoor swimming pool in the entire district we had lost touch with the game when the winter had set in October of 2019.” And then the pandemic struck down training of his 26 swimming players, including eight girls, in the district. Of these, 12 have participated in national competitions. With the day temperature rising, he says, summer seems to be arriving earlier than expected. He hopes to re-open the swimming pool for training from next month.

Feel of the field

From training through video-conferencing and online sessions to resume training on the ground under watchful gaze of coaches has come as big relief for sportspersons. Some of the players had to arrange equipment at home for maintaining fitness levels and even resort to drills on rooftop. All along those locked-in months, technical training had become a thing of the past – but not anymore.

Prabhjit, an athlete, says, “In track and field games players heavily depend upon nutritious diet to improve their performance in the competitions. They had a hard time getting their hands on neither rich nutritious diet as they could neither stock nor buy due to the closure of shops and markets. Now, all kinds of eatables are easily available in the market.”