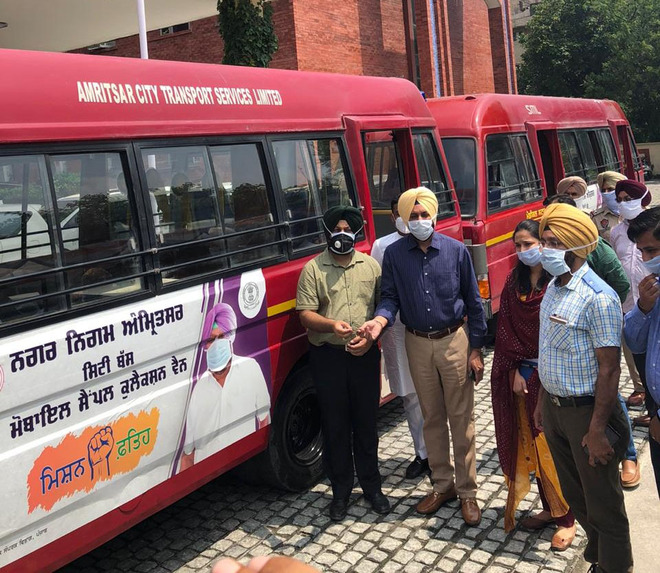 Mayor Karamjit Singh Rintu hands over the keys of mobile testing vans to DC Gurpreet S Khaira (left) in Amritsar on Friday. The vans have been provided by the MC to the district administration.

Speaking on the occasion, Mayor Karamjit Singh Rintu said a mobile testing van had already been provided by the Municipal Corporation to the district administration. He said the MC built separate compartments for the driver, doctors and patients in these vans at a cost of Rs 2 lakh.

Handing over the keys of both the testing vans to the Deputy Commissioner, Mayor Karamjit Singh said with the help of these vans the number of tests would increase in the district.

Rintu said if the district administration needed more mobile testing vans then more would be provided by the Municipal Corporation.

“If someone notices symptoms of the Covid-19 disease, he should immediately visit the nearest hospital and get tested for the virus to protect himself and the family. The medical helpline number 104 can be contacted for information about Covid-19 tests,” added Rintu.

On the occasion, DC Gurpreet Singh Khaira said these two mobile testing vans would be sent to different areas of the city and first of all the vans would take samples at dhabas where a large number of customers could be seen. He said everybody should support the government to get rid of the virus and get their test done in case of any symptoms.

He said with these mobile testing vans visiting their areas or localities people would not have to travel far-off areas for testing. Khaira said no medical prescription was required for undergoing the test.

Khaira said the mobile testing vans would work under the supervision of the SDM and if any positive case was found in the area then other people would also be tested to break the chain of the Covid-19 disease.