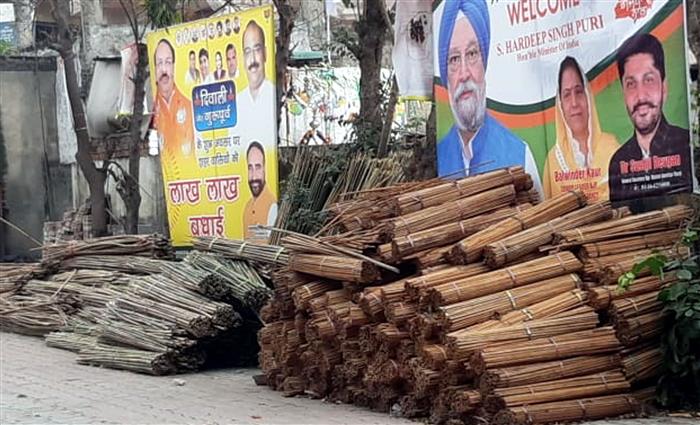 As the campaigning is yet to pick up pace, bundles of sticks used for flags are lying outside the district BJP office in Amritsar. Photo: Vishal Kumar

The usual hustle and bustle associated with Assembly elections is missing this time as owing to strict guidelines by the EC, candidates are unable to organise large meetings and rallies.

This election season, residents have still not seen the supporters of political parties dancing to the beat of dhol during door to door campaigns or loud bike rallies or listened to annoying slogans on auto-rickshaws.

For long, loudspeaker-mounted auto-rickshaws that covered the entire length and breadth of a constituency several times in a day have remained central to poll canvassing in the city.

Even flyers, hanging banners and posters are missing the election scene so far. While all three major parties, SAD, Congress and AAP have already announced their candidates, the celebration kind of election canvassing is amiss.

While political candidates surely might be upset as they are unable to show their strength by organising large gatherings, residents are happy and said election canvassing must remain silent and political parties should not be allowed to disturb the general public.

City residents said the usual slogans as ‘tohade elake de parhe likhe, soojwan, imandar candidate’ (well-educated, rational and honest candidate from your area) and ‘ehna di kamyabi tohadi apni kamyabi hai’ (their success is your own success) which were played at high volume through the day are no more audible.

“People already know their candidates. The election campaign does not matter until each party and candidate gets to play in the same field,” said Santokh Singh, a retired school principal. He said he hopes the election campaign will remain silent in the coming days too. However, political observers feel that the election fever would sooner or later grip the city and candidates and said political activity would gain momentum after the nominations are filed.

Amritsar: To facilitate smooth conduct of the elections, the District Electoral Office conducted Assembly-wise randomisation of electronic voting machines in the presence of representatives of political parties on Tuesday. DEO Gurpreet Singh Khaira said polling booths have been set up in all constituencies of the district, which were connected with EVMs and VVPATs. He said surplus EVMs and VVPATs have been kept reserved for the polling booths so that in case of any defective unit, the electoral process remains unaffected. He said after the conclusion of randomisation, the Assistant Returning Officers will keep the EVMs in strong rooms in their respective areas. Working of EVM and VVPAT machines was also displayed. He informed the representatives of political parties that the vote cast on VVPATs could be viewed on the screen for seven seconds. TNS